Dr. Hyoung Jin Moon, a facial plastic surgeon from South Korea, conducts a study to explore what makes a Chinese face attractive by measuring the angles and proportions of 19 Chinese women

However, these methods fail to describe the ideal face shape and show many limitations1,4.

In general, we know that an attractive face varies according to time period, ethnicity, race, gender and personal preferences5–8.

We need to understand the different perceptions of beauty that vary by race, ethnicity, and country. 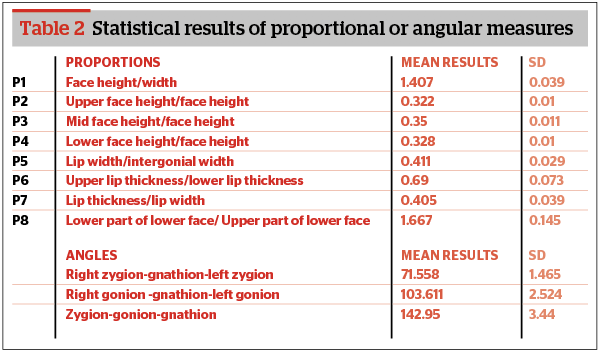 Using the photographs, soft tissue landmarks were marked, and defined proportions and angles for each celebrity were measured (Table 1).

The facial landmarks required for measurement and the ratios and angles measured for the study were based on the research results of Rhee et al9,10,11.

Based on the above results, a composite of the average attractive Chinese face will result in Figure 2.

In general, the ideal facial length to width ratio was found to be 1:3. For the average attractive Chinese face, that ratio was 1.407:1; in other words, the face was more narrow and longer. Ideally, the upper to middle to lower facial ratio would be 1:1:1, but for the Chinese face it was 0.322: 0.350: 0.328, where the middle portion was relatively long. For the lower part of the face, the ratio of the upper part (sn-sto) to lower part (sto-go) is 1: 1.667, which is longer compared to other races12. The ratio of the lip’s width to length was 1:0.405 and the ratio of the width of the lip to the width of the lower face was 1:0.411. The upper lip width was 73% of that of the lower lip, indicating that Chinese prefer narrow but thick lips comparing other research results13. Thick upper lips, in particular, are preferred. The angle of the gonion (zy-go-gn) was 142.95 degrees, and the facial angle (zy-gn-zy) was 71.558 degrees. The bigonial angle (go-gn-go) was 103.611 degrees. The average Chinese attractive face tended to be narrow and slender. In conclusion, the average attractive Chinese face is long in length, narrow in width and overall slim. The philtrum is long, lips are narrow and thick, and the upper lip is relatively thick.

Dermapen 4 Is not just an Update, It’s Reinventing MicroNeedling