Make Your Skin Flawless and Beautiful with PICOCARE

FLAWLESS BEAUTIFUL skin is the desire of everyone regardless of age, gender or race. For this purpose, various kinds of energy based devices and the like are used and skin treatments performed. Pigmented lesion treatment and skin brightening are one of the ways to make flawless skin, which uses various wavelengths and pulse widths including nanosecond-domain Q-switched (QS) lasers, long-pulsed lasers, fractional lasers, and many more.

In particular, QS lasers have been extensively used to remove many benign cutaneous pigmented lesions, such as lentigines, freckles, age spots café-au-lait, nevus of Ota, Hori’s nevus, melasma and others.

Since the introduction of picosecond lasers in recent years, trends are shifting from QS lasers to picosecond lasers. I am using PICOCARE developed by WONTECH, Co, Ltd. (Daejeon, South Korea). PICOCARE is very useful for the treatment of various pigments.

In the case of nanosecond-pulse duration, the photoacoustic effect accompanied by a photothermal effect was used to fragment melanosomes. In comparison, in the case of shorter pulse durations, picoseconds, the greater photoacoustic effect with less photothermal effect fragments the target more finely and minimizes the damage to surrounding tissue. Because of this, compared to QS lasers, the picosecond laser is much safer in terms of PIH (post-inflammatory hyperpigmentation). Moreover, the use of picosecond laser also reduces the procedural discomfort and it is more effective, to prevent the reoccurrence and aggravation of the lesion in terms of its fast response. I was able to confirm the clinical safety and efficacy of the picosecond laser over the QS laser while using PICOCARE. PICOCARE can be considered as a gentle but powerful and fast method of treatment for pigment removal.

PICOCARE has a pulse duration which is shorter than the commercially available pulse duration. This laser system also has dual wavelengths of 532nm and 1064nm to treat epidermal pigmentations as well as dermal pigmented lesions. In addition, the 532nm, which has a high melanin absorption coefficient, has a limitation in using a strong energy in dark skin types such as Asian skin types. PICOCARE has an advantage of using technologically lowered fluence in consideration of use in darker skin types.

PICOCARE’s peak power at 1064nm is 1.33GW and the peak power at 532nm is 0.8GW. Because of its good performance, lower fluence can effectively treat pigments with lower energy. To treat dermal pigmented lesions such as nevus of Ota, ABNOM (acquired bilateral nevus ota-like macules), 2–5J/cm2 were used which is one-half or one-third lower than that of QS lasers. Patients with dermal pigmentations are very satisfied, not only because the procedure results are good, but because the procedure is less painful. As a clinical tip, nevertheless, much lower fluence with a toning technique is sometimes used to alleviate patient complaints of downtime from daily life, such as erythema, edema and petechiae, which accompany when treating nevus of Ota or/and ABNOM.

I also use a toning technique to treat melasma patients. Almost all physicians including myself think melasma is the most challenging pigmentary disorder to achieve great results. Complex solutions are required because the lesion is related to complex causes and factors such as abnormal melanocyte proliferation, dermal extracellular matrix abnormality, elastosis and fibroblast secreted factors, altered basal membrane and more.

Laser toning is usually selected as the first treatment option for melasma treatment. Toning is delivering multiple passes of low fluence at 1064 nm wavelength and is a gentle way to remove melasma pigmentation without irritating the lesions. Picolaser-toning typically uses the fluence less than 1J/cm2 whereas 2-2.5J/cm2 is commonly used in QS lasers. The laser toning results with 5 sessions of PICOCARE is often equivalent to 10 sessions of the QS laser. Even the incidence of mottled hypopigmentation, which often occurs as a side-effect of laser toning with QS laser, is also much lower with the picosecond laser. 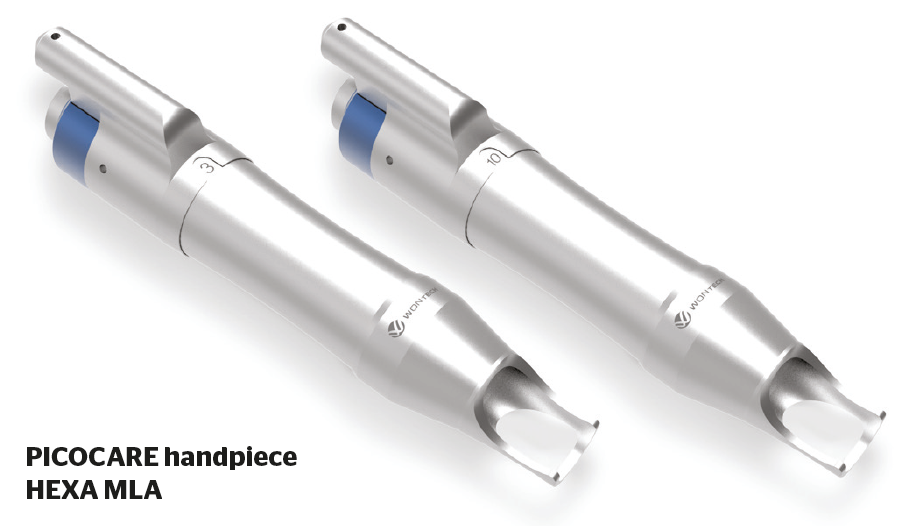 PICOCARE has a variety of handpieces, of which there is a fractional handpiece consisting of a multiple focusing lens called HEXA MLA. It irradiates the fractionated beam that the energy intensity is concentrated at the center of each fractionated beam by the MLA characteristic, so that it delivers much higher power density to the skin than the standard handpiece. When this higher power density delivers within a picosecond-pulse duration, LIOB (laser induced optical breakdown) occurs. LIOB does not cause photothermal effects but causes photomechanical effects on epidermis or/and dermis, creating vacuoles and inducing wound healing processes while preserving the stratum corneum and basal membrane intact.

I recently used the HEXA MLA with a lower fluence using a toning technique to treat melasma patients. This method provides the double effects:

In addition, the basal membrane is preserved intact when laser energy is delivered, so it is safe to prevent melasma conditions from deteriorating. The HEXA MLA procedure seems more effective to melasma even with one to three sessions. I also perform drug delivery using growth factors immediately after the procedure for dramatic clinical outcomes.

For reference, HEXA MLA is widely used for various types of scar treatment as well as for skin rejuvenation, including improvements of enlarged pores, fine lines, wrinkles, rhytides, uneven skin texture and dull skin tone. Thanks to the special mechanism of the HEXA MLA procedure, the patients experience relatively little pain and downtime, compared to the conventional fractional lasers, so patients also prefer and choose this treatment as an alternative.

It is clear that picosecond lasers are superior to nanosecond lasers in terms of safety and effectiveness. Based on my clinical trials, PICOCARE is very useful for the treatment of benign pigmented lesions. Thus, I will continue my efforts to make flawless beautiful skin by using PICOCARE to satisfy my patients’ desire.

Find out more at: www.wtlaser.com/

PICOCARE: A new paradigm for treatment of various skin lesions