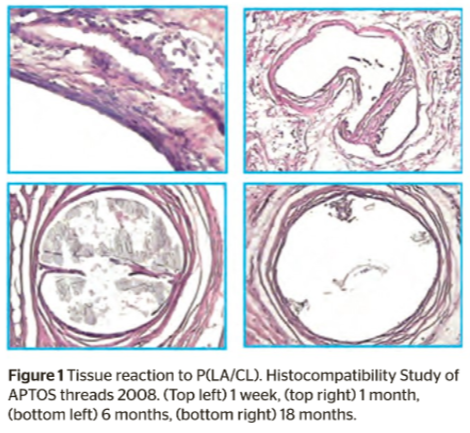 Since the early 1990’s, surgeons have been evaluating new surgical techniques for lifting the cheeks and jowls. After the arrival of thread-lift techniques for the face, many aesthetic practitioners learnt the technique to offer their patients an alternative option for facial rejuvenation. The thread lift is a minimally invasive procedure that utilizes sutures to mechanically lift the skin. According to data from the American Society for Aesthetic Plastic Surgery (ASAPS), during the last 20 years the number of non-surgical procedures increased by more than 12 times compared to surgical procedures, which increased by two times in the same time1.

What is the reason for such growth in thread lift methods?

First, it is a completely non-invasive method of rebuilding collagen in the skin, resulting in an overall tightening and lifting effect. The original facelift technique does not require any incisions.

Second, no special preparation is required prior to the treatment2; there is no need for hospitalization, general anesthesia or long-term rehabilitation. They are called ‘weekend procedures’, which is especially important for active and young women and men.

The first threads for thread lifting were mainly considered for plastic surgeons. They were composed of silicone and polypropylene and were inserted through incision and general anesthesia. A long downtime and other specific features did not make them popular.

The crucial step for future success was the appearance of absorbable threads on the market. Being used for more than 30 years, it proved its safety and reserved prominent position in surgery. The threads consist of L-polylactic acid in combination with Σ-caprolactone (P(LA/CL)) in a 3:1 ratio.

In addition, the main component L-polylactic acid is responsible for the rejuvenation effect. It stimulates the natural revitalization of tissues and prolongs the ageing process.

During thread biodegradation L-lactic acid is released into surrounding tissues, stimulating neocollagenesis and their rehydration3,4.

Σ-caprolactone, the second component of the thread, slows down its biodegradation, increasing the duration of the tightening effect, and serves as a lactic acid delivery system to surrounding tissues3–5.

The overall percentage of degradation of the material from day one to 72 weeks was 41.2%6. The full reabsorbtion period for the PLA threads is between one and a half and two years7.

The tissues react to the implantation of the P(LA/CL) threads by formation of collagen type 1 and type 3, and by development of a fibrous capsule. Even after full biodegradation, the fibrous capsule continues to hold soft tissue for 3 to 5 months (Figure 1). 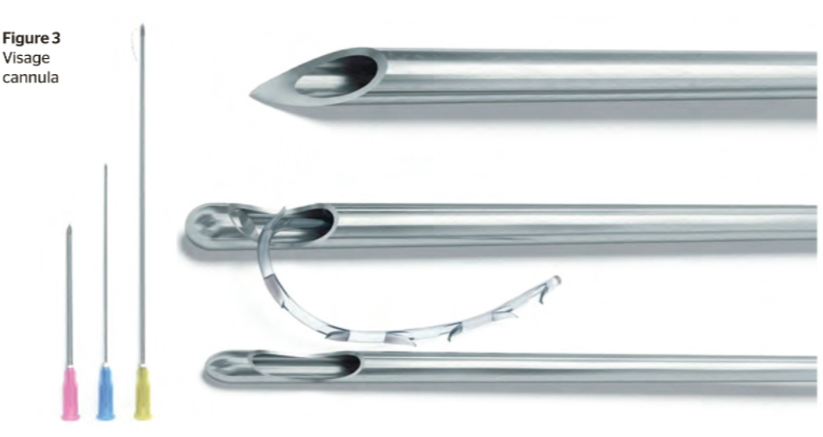 Excellence Visage represents the new series of techniques for lifting and armoring of the face and body tissues with the help of fully absorbable threads composed of P(LA/CL).

The Excellence line appeared in 2013. The main product in this line is Visage. There are 10 threads with multidirectional barbs of 15 cm length in Excellence Visage and 7 cm length in Nano Excellence already placed in atraumatic cannulas; the diameter of threads is USP 2/0.

The main peculiarity of Excellence Visage is disposition of its multidirectional barbs (Figure 2). This configuration gives the opportunity to evenly distribute the tension of the tissues along the entire length of the thread, and the three-dimensional arrangement of the barbs allows for the most reliable fixation to be achieved.

Excellence Visage is a universal product. It can be successfully applied both for lifting and reinforcement of almost all areas of the face and neck.

One of the most important characteristics is the thread is preinstalled in a special atraumatic cannula with the rounded tip and a hole aside (Figure 3).

The rounded tip of the cannula does not give the possibility to go beyond the right plane and pushes the tissue without any breaks. Thus, the superficial muscular-aponeurotic system (SMAS) perforation and damage in deeper structures are practically impossible. The risk of the skin retraction is also minimal. Application of Excellence Visage is the least traumatic amongst existing thread lift methods.

The application of Excellence Visage can be combined with other cosmetology procedures and surgical operations.

Excellence Visage is indicated in patients of 25 to 45 years, for:

Nano Excellence is indicated in patients of the same age group (25-45 years old) for:

Contraindications are the same as for the majority of thread lift procedures and include pregnancy and lactation, acute and chronic infectious diseases, presence of benign and malignant tumors, keloid predisposition, coagulation disorders, and serious chronic diseases. 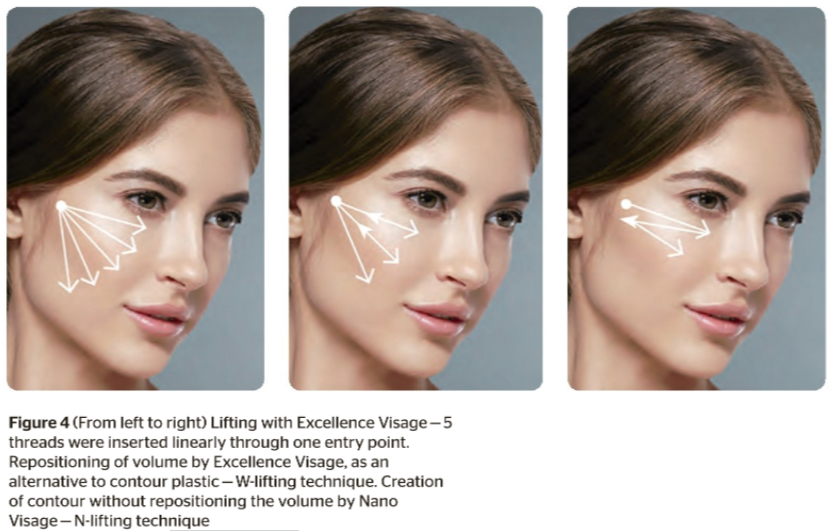 Method of application of Excellence Visage

The procedure is carried out in a sterile treatment room. No special preparation is required prior to the treatment. If the threads are used in combination with botulinum toxin injection, then BTX is recommended 2 weeks prior to thread lift. The doctor interviews the patient, determines indications and contraindications, explains the technique, warns about possible complications and instructs for the post-treatment period. Written informed consent should be provided by all patients for the use and distribution of their photographs.

The control checkup was planned on the third day. There were slight swelling and minor hematomas along the treatment area. The minor asymmetry was explained by the hypercorrection and swelling during the procedure, which disappeared subsequently. In some patients, we could still observe minor asymmetry 2 weeks after the procedure, but at the end of the first month, asymmetry completely disappeared and a redefined face, lifting effect, a clear contour and repositioned volume appeared. The skin became smoother, looked more elastic and moisturized due to biorevitalization.

According to observations of 420 thread-lift procedures performed at our clinic, desired results in all patients were preserved during the year. The following assessments were obtained: 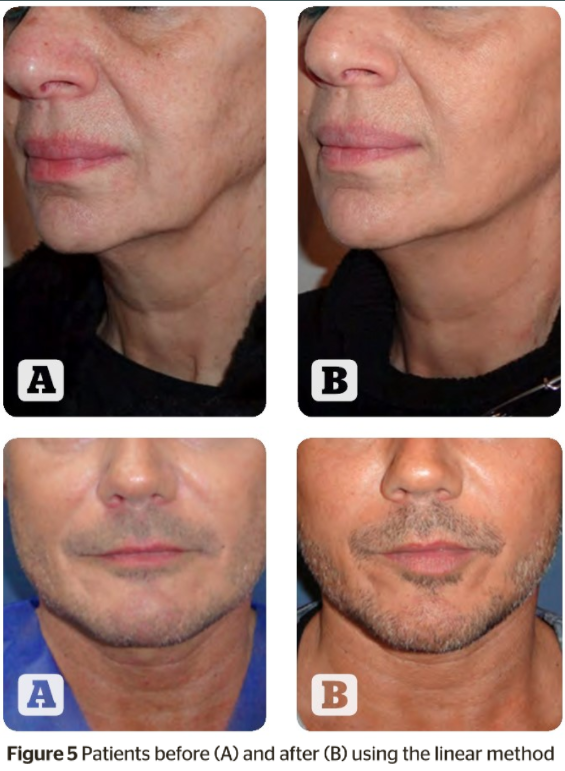 The features of Excellence Visage, arrangement of barbs, threads with different lengths, and a cannula with atraumatic rounded end determines its advantages and effectiveness.

Excellence Visage and Nano Excellence have proven themselves both in monotherapy and in combination with other aesthetic procedures. They are highly effective for lifting, contouring, volumization and reinforcement. An additional advantage is rejuvenation due to thread biodegradation and stimulation of new collagen synthesis

The power of skin resurfacing 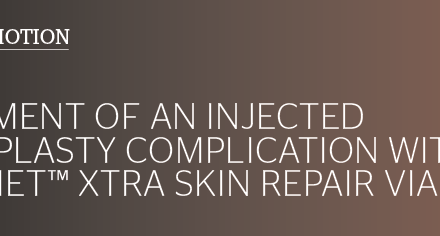