New statistics from clinic comparison website, WhatClinic.com, shows which cosmetic treatments were hot and not in 2014 and potential trends for 2015.

Thread lift enquiries shot up by 1165% in the past twelve months, despite the sizeable average £570 price tag, up from £544 in 2013. The process, which is used for rejuvenating skin tone and improving the structure of the face, involves soluble polydioxanone thread being inserted through the skin with a fine needle to tighten and firm the skin, while smoothing wrinkles.

Another popular skin rejuvenation treatment in 2014 has been silhouette lifts, with enquiries up seven-fold (633%) in the past 12 months alone. The average price for one treatment has dropped by more than a tenth (11%) in the past year, to £629 from £706 per session.

Fat reduction injections and lipodissolve saw big increases in the number of enquiries, at 518% and 203%, respectively. The non-invasive treatments cost a fraction of the price of their surgical alternatives and require no downtime or general anaesthetic.

Enquiries for fat filler injections increased by 1100% in the last quarter of 2014 as patients opted for this more ‘natural’ filler. Platelet rich plasma facials, also known as ‘the vampire facial’ also saw enquiries shoot up by 223% in the same time period. The treatment extracts platelets from the patient’s blood and re-injects them into the face, neck or hands, to give more youthful looking skin. 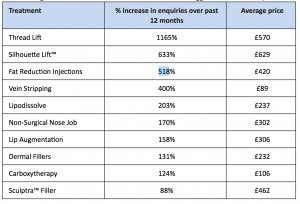 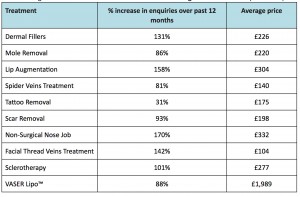 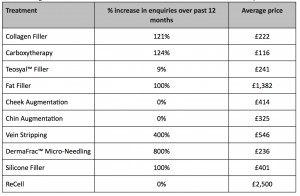 Sesderma & Mediderma at the 17th edition of AMWC Monaco 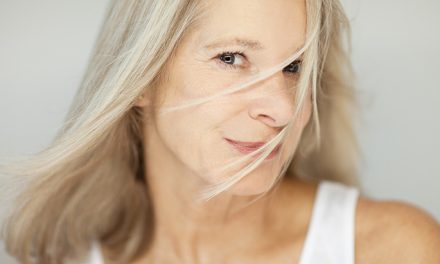