The danger of abdominal obesity with an ‘iceberg’ of insulin resistance

ABSTRACT
Despite extensive clinical research regarding the correlation between abdominal obesity (increased waist circumference) and insulin resistance (IR), this condition is still largely perceived as an aesthetic problem from both patients and doctors of different specialties. Previously accepted as an inevitable sign of ageing, it should now be considered as an alarming sign of potentially dangerous conditions, including an underlying ‘iceberg’ of IR. IR results in a variety of cascade processes that lead to metabolic syndrome, type 2 diabetes, polycystic ovarian syndrome, and a range of cancers. The aim of this article is to emphasise the importance of early identification of individuals with abdominal obesity by a variety of medical specialists (aesthetic physicians, plastic surgeons, general practitioners) in order to refer or begin lifestyle and nutritional interventions, and botanical supplementation for a better outcome. A complexity of causes for IR such as inflammation, visceral fat, cytokine activity, insulin receptor sensitivity, and ongoing environmental changes, makes this condition extremely difficult to treat. An integrative medical approach should be applied rather than isolated treatments for conditions such as hyperglycaemia, hypertension and lipid problems, IR, and abdominal obesity. This holistic treatment should be applied in the early stages of IR — again emphasising the importance of addressing abdominal obesity as a serious medical condition.

In an ageing population, the proportion of fat to body weight tends to increase, particularly in the midsection of the body. In the past we might have accepted these changes as an inevitable fact of ageing. However, we have begun to notice that as our abdominal waist grows, so do our health risks, and abdominal obesity has been a well-established risk factor for many detrimental diseases of which cardiometabolic syndrome is a leading condition. Abdominal adiposity positively correlates with visceral fat, which lies deeply within the abdominal cavity and pads the spaces between the abdominal organs. It is largely responsible for a metabolic effect on insulin resistance (IR), cardiometabolic syndrome, and type 2 diabetes. The International Diabetes Federation (IDF) revealed that type 2 diabetes currently affects 246 million people worldwide and is expected to affect 380 million by 2025. There is approximately 6 million undiagnosed cases in the US1.

Through extensive research on abdominal (central) adiposity and waist circumference, Table 1 has been established as part of the necessary criteria for the diagnosis of cardiometabolic syndrome (National Cholesterol Eeducation (NCE) ATP III criteria, World Health Organization (WHO) criteria, IDF criteria). Abdominal obesity is still overlooked in many fields. It is often seen as an aesthetic problem and only treated as a subcutaneous fat problem, and treated with a variety of non-surgical aesthetic procedures and liposuction. Liposuction does not significantly alter the insulin sensitivity of the muscles, liver, or adipose tissues; does not significantly alter plasma concentrations of C-reactive protein (CRP), interleukin (IL)-6, tumour necrosis factor (TNF)-α, and adiponectin; and does not significantly affect other risk factors for coronary heart disease2. The risk of cardiometabolic syndrome remains the same regardless of subcutaneous fat removal as visceral fat remains intact.

Failure to diagnose IR in the younger population has a possible association with abdominal obesity (cardiometabolic syndrome is present in 6.7% of people aged 20–29 years and is increasing every year)3. 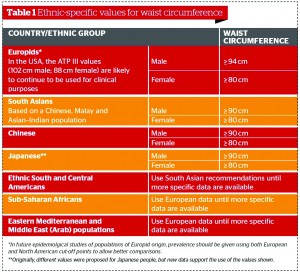 Associated conditions of abdominal obesity and IR are usualy treated by conventional medicine as isolated problems, such as hypertension, hyperlipidaemia, and type 2 diabetes. They are often all treated with conventional chronic medication without addressing the problem as a syndrome, holistically, taking into consideration inflammation, oxidation, and detoxyfication. Recent data suggests that people with hypertension have a two‑fold higher prevalence of diabetes and obesity, of which half are insulin resistant3.

Measuring waist circumference as a first step, or referring patients with abdominal adiposity to a physician can help identify individuals with a high risk of IR.

The IDF made the following recommendation in their 2006 worldwide consensus definition of metabolic syndrome: ‘With the metabolic syndrome driving the twin global epidemics of type 2 diabetes and CVD there is an overwhelming moral, medical, and economic imperative to identify those individuals with metabolic syndrome early, so that lifestyle interventions and treatment may prevent the development of diabetes and/or cardiovascular disease’4.

What is insulin resistance?

IR is a widely used clinical term. It is usually defined as a state characterised by the reduced glucose-lowering activity of insulin, but it can also be used as a shorthand label for a clinical syndrome encompassing significant pathologies of metabolic syndrome. Furthermore, cellular insensitivity to the action of insulin is also termed as IR. Insulin resistance means the cells of the body do not respond appropriately to insulin, owing to either direct insulin resistance at the cellular level or through the countering action of insulin by counter-regulatory hormones.

Insulin is a gene expression modulator involved in many biochemical processes in the body, such as:

Insulin-resistant tissue, such as adipose and skeletal, will require higher insulin levels compared to insulin-sensitive tissue, such as the heart, adrenals, and brain where hyperinsulinaemia can cause many adverse effects. Understanding the complex role of insulin in almost all tissues in our body will ultimately lead to an understanding of why IR involves such a variety of pathologies. Insulin-resistant/hyperinsulinaemic individuals who have adequate compensation of insulin production have been grouped into a syndrome called syndrome X, cardiometabolic syndrome, IR syndrome, or metabolic syndrome. This syndrome is defined as a cluster of signs and symptoms secondary to insulin resistance and the resulting hyperinsulinaemia. According to the IDF definition, for a person to be defined as having metabolic syndrome they must have abdominal obesity, defined as waist circumference with ethnic specific values (Table 1), plus any two of the four factors listed in Table 2 (if body mass index (BMI) is >30 kg/m2, central obesity can be assumed and waist circumference does not need to be measured)4.

The following conditions are linked to the pathophysiology of insulin resistance, which is an independent predictor of age-related diseases5: