Pronounced localised adiposities may generate variable degrees of psychological embarrassment with potential negative effects on overall quality of life. Fortunately, topical treatments may have a role in reducing unwanted localised adiposities as well as keeping them under control after positive clinical results have been achieved by different medico-surgical procedures. The authors’ have been working on topical formulations aiming at reducing localised adiposities for many years. Their challenge in this study was to try to reduce the amount of time necessary to obtain effective subcutaneous fat remodelling using an innovative vehicle able to optimise trans-epidermal penetration of cosmetic active ingredients. Through morphometric and ultrasonograpic findings, the authors’ could confirm a significant slimming effect induced by active the product after 10 nights of topical application.

Localised adiposities in post-adolescent females are considered important components of an otherwise normal physiological condition and might be interpreted as part of a ‘precautionary body status’ able to guarantee adequate caloric supply in case of pregnancy and lactation. When excessively evident, they can modify female body silhouette beyond normal proportions. These ‘gender-specific fat deposits’ can be observed in approximately 85% of women.

Pronounced localised adiposities may generate variable degrees of psychological embarrassment with potential negative effects on overall quality of life (QOL). Various non-invasive and invasive strategies have been proposed to reduce and control the evolution of excessive amounts of localised fat with variable degrees of success. 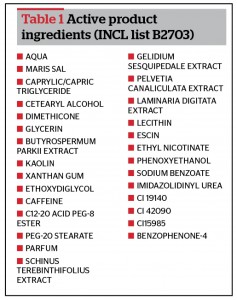 Normal adipose tissue is physiologically regulated by a highly efficient dynamic equilibrium between fat ‘storage’ (lipogenesis) and fat ‘release’ (lipolysis) in form of FFA and glycerol.

When fat storage is in excess, hypertrophic fat cells can gradually stretch stromal micro-vessels. Should this abnormal micro-anatomical condition persist, a progressive impairment of peri-adipocyte micro-circulation leading to a reduction of oxygen perfusion and derangement of triglyceride metabolism ensues.

Localised adiposities represent still a benign condition and should be considered with appropriate caution when proposing strategies to improve them, avoiding aggressive treatments whenever possible. The multi-factorial origin of this potentially disturbing cosmetic problem should be thoroughly discussed with patients to make them understand the importance of accepting multifaceted, combined treatment strategies involving: prevention, treatment, and long-time maintenance protocols.

Topical treatments might have a role in reducing unwanted localised adiposities as well as keeping them under control after positive clinical results have been achieved by different medico-surgical procedures5–8.

The authors have been working on topical formulations aiming at reducing localised adiposities for many years. The authors’ experience allowed them to achieve significant clinical results in terms of reduction of localised fat deposits and their long-term clinical control9–11. Fat reducing processes induced by active topical formulations are relatively long and challenging since their action depend just on cosmetic ingredients able to trigger positive metabolic effects on subcutaneous adipose tissue. The authors’ challenge in this study was to try to reduce the amount of time necessary to obtain effective subcutaneous fat remodelling thanks to an innovative vehicle able to optimise trans-epidermal penetration of cosmetic active ingredients.

The new slimming topical formulation was challenged against placebo to assess its tolerability and clinical effectiveness after one daily application at bed time for a total period of 4 weeks. Clinical results were assessed as early as 10 days after beginning of treatment by clinical and non-invasive instrumental evaluations by a team of dermatologists as well as by self assessment questionnaires completed by all study volunteers. 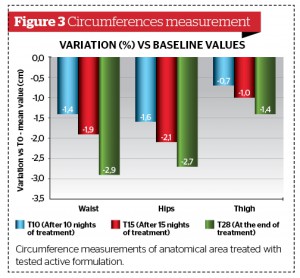 Study volunteers were asked not to modify their diet and lifestyle habits during the whole duration of the study.

All volunteers were asked to sign a specific informed consent and provide their menstrual cycle details, in order for investigators to properly interpret possible weight variations observed along the study as possibly related to normally occurring hormonal modifications.

During the first, baseline clinical evaluation (T0), each volunteer was blindly assigned a progressive identification number corresponding to the previous treatment randomisation (active vs placebo) secretly set by the formulating laboratory (the active product ingredients can be found listed in Table 1).

Identical plastic tubes containing active and placebo formulations were distributed to each volunteer. Volunteers were instructed to apply test products, on thighs, waist, and hips once a day, preferably at bed time, followed by a 3 minute full hand massage.

Each volunteer was evaluated 20 minutes after acclimatisation at standard environmental conditions (18–20°C and 40–60% relative humidity). Body weight was recorded at each clinical evaluation.

Ultrasound thickness of all localised subcutaneous adipose layers corresponding to study treatment sites were measured at every clinical evaluation on the same anatomical landmarks (Figure 2).

Ultrasound waves generate back scattering passing through body structures according to their acoustic densities. Their signals can be translated into visual representations according to an A-mode or B-mode scanning resolution. B-mode scanning allows to generate detailed bi-dimensional cross section images of the skin useful to identify its different anatomical macro-components. 10–15 MHz ultrasound sources are usually chosen for skin examination.

Skin thickness can be measured thanks to the time difference between two back scattering signals: (A) skin surface — ultrasound transducer interface; (B) dermis — hypodermis interface. Skin thickness can be calculated multiplying ultrasonic wave transit time between point A and point B by their speed (1540m/s).

Test products were also evaluated by each volunteer in terms of cosmetic characteristics, like fragrance and texture, as well as their clinical efficacy through self assessment questionnaires.

No ‘drop out’ was registered among both study groups. Statistical analysis was performed on 89 subjects since data collected from one volunteer belonging to the group treated with the active product showed a protocol violation.

Statistical analysis was therefore carried out on 89 subjects: 44 volunteers belonging to the active product group and 45 to the placebo group.

The following statistical criteria were chosen: 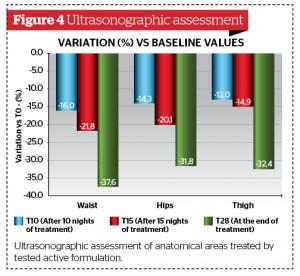 Volunteers weight was recorded at each visits. Average weight variations were considered compatible with physiological body weight fluctuations independent from the topical treatment performed during the study.

Regular, once a day application of active formulation induced statistically evident clinical improvements at the end of the treatment period (T28) compared to baseline (T0). Clinical evaluation scores improved at least one point in 95.5% of volunteers treated with active formulation (Wilcoxon test p < 0.001). 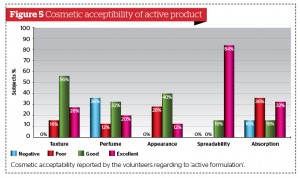 All volunteers were asked to fill out a standardised self-assessment questionnaire focused on personal degree of satisfaction regarding product characteristics (fragrance, easiness of topical distribution, texture, overall appearance, and easiness of trans-epidermal absorption) and skin quality (smoothness, softness, firmness, and tone) perceived 10 and 28 days after once a day continuous application of active formulation and placebo. (Fig. 5 to 8). The majority of volunteers belonging to the active product group confirmed their personal satisfaction on both product characteristics and their skin quality during and after the topical treatment. They were also quite pleased about the circumferences reduction associated with a perceived improvement of their body silhouette on treated areas.

The active product tested in this study was formulated to be specifically applied before bedtime in order to work synergistically with the biological effects induced by growth hormone (GH). This hormone is mainly released during the night and is known to activate lipolysis12–18. Other important considerations favouring bedtime topical application of slimming products can be summarised by the advantage on physiological drainage of interstitial fluids given by horizontal body position during sleep; a slightly increased body temperature19; an improved peripheral blood flow20,21; a more active cellular metabolism12–14 ; and an enhanced skin permeability22.

Data from the literature confirmed also that vasoactive ingredients, such as nicotinates contained in the formulation tested in the study, are better absorbed during night time23.

The active formulation tested in the study is a pale green, rich texture, saline emulsion with a good trans-cutaneous absorption .

Its emulsifier system is based on non-ionic ingredients with a high degree of chemical stability even at high concentrations of electrolytes. Key oily phase ingredients are: 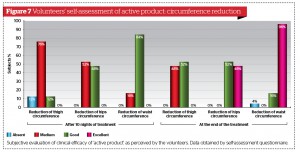 Functional ingredients were selected with the specific aim of stimulating lipolysis and superficial microcirculation, associated with an efficient draining action of interstitial fluids.

Other functional actives selected to be part of the tested formula were:

Selected ingredients with vaso-active properties were chosen to be included in the formula: 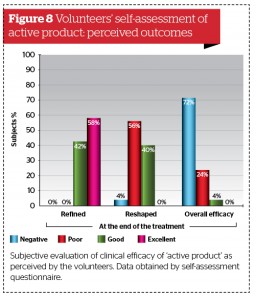 Ethyl nicotinate and microencapsulated Escin work synergistically to induce temporary peripheral vasodilatation when applied to skin surfaces. This clinically evident effect can successfully decrease tissue toxins through an efficient ‘draining action’ on interstitial fluids; improve tissue oxygenation contributing to enhance cellular metabolism, including lipolysis; and increase positive skin interaction with the other functional ingredients contained in the slimming formula. Escin and ethyl nicotinate, in particular, are responsible for a temporary, mild stinging sensation associated with a short-lasting erythema observed immediately after the application of the slimming formula.

Ethoxydiglycol was selected as a trans-epidermal penetration enhancer to optimise the localised bioavailability of the active ingredients contained in the formula24.

The clinical and instrumental assessments obtained on the two study groups consisting of standardised circumference and sub-cutaneous fat thickness ultrasound measurements confirmed a localised slimming and body reshaping effect of the active formula over placebo.

No significant slimming effects were observed on the placebo group.

Standardised self-assessment questionnaires completed by the two study groups confirmed the observation of the slimming effect induced by the active product as early as 10 days after continuous once-a-day topical application. Clinical results were shown further improved at the end of the clinical trial (28 days).

The achievement of such an early slimming effect (10 days) on selected body areas was certainly made possible by the effective trans-epidermal penetration enhancer contained in the active formula. This strategy, combined with an innovative combination of cosmetic active ingredients, including pink pepper concentrated oil, was able to induce a consistent localised lipolytic and remodeling effect.

Overall treatment compliance was good in both tested groups throughout the whole duration of the study. The majority of actively treated subjects were satisfied about their skin smoothness, softness and firmness. They were also quite pleased about the circumferential decrease observed on selected body sites, which contributed to generate a cosmetically evident reshaping of body silhouette.

No adverse events or systemic reactions have been reported during the whole duration of the study .

Some volunteers belonging to the actively treated group reported a moderate stinging sensation and a temporary mild degree erythema immediately after the application of the active formula. These symptoms, possibly related to the vaso-active components contained in the formulation, subsided spontaneously without any further treatment and were interpreted ad a sign of ‘efficacy’ by most of volunteers.

This study confirms that well formulated topical cosmetics can be safe and effective in providing clinically evident slimming effects on localised body adiposities.