Soft tissue augmentation with dermal fillers has become an integral part of most aesthetic practices. Fortunately, adverse reactions are usually mild and transient. However, significant adverse events such as vascular occlusion also occur. Vascular compromise occurs because of embolisation and/or compression material into/onto the vasculature. In this article, the author theorises that late onset vascular occlusion may occur not only due to embolisation but because hyaluronic acid (HA) expands due to its hydrophilic action and compresses the facial artery or its branches. He proposes that intravenous steroids should be added to the accepted reversal protocol. His goal is not to promote this as a definitive measure but rather to establish a discussion on treatment protocols that may be helpful to other physicians in the future.

Within the past 15 years, facial soft-tissue augmentation has become very popular in aesthetic clinics around the world. Although most biodegradable-type products are considered safe, adverse events do occur that are time-limited. The products have been observed to have severe, persistent, and recurrent complications. Histological examinations in these cases, often show the presence and persistence of the filler1. Dermal filler complications are divided into ‘early’ and ‘delayed’ in terms of time of occurrence and ‘minor’ and ‘major’ in terms of severity1, 2. Minor complications occurring immediately or hours to days after injection include injection site reactions, such as bruising, erythema, pain and tenderness, swelling, and itching. These events usually resolve within a week without sequelae3, 4. Severe vascular adverse events have been reported in the glabellar and nasolabial regions after treatment with both biodegradable and non-biodegradable injectable fillers5.

Although rarely reported in the literature, complications related to interrupted blood supply to the nose can occur with nasolabial fold dermal injection. The exact mechanism of this event is unknown, however it is widely accepted that vascular compromise is a function of compression and/or embolisation of material into the vasculature. It has been theorised that, as injected hyaluronic acid (HA) expands because of its hydrophilic action, the facial artery, angular artery, or its branches, become compressed. the facial artery runs in an oblique direction over the mandible toward the nasal sidewall. It passes under the zygomaticus muscles, crossing the nasolabial fold. It turns to run in the alar crease and along the lateral nasal wall, where it terminates in the angular artery, which continues toward the medial orbital rim6.

There are several important factors that may lessen the occurrence of adverse events. Before injecting any dermal filler, a thorough medical history including medication (especially blood thinners), allergies, and scarring history (e.g. tendency for keloids) should be taken. The injector should be well trained in injection technique and know which filler to implant at which depth. Understanding the anatomy, limitations of the filler and proper technique can reduce the risk of adverse effects. When complications occur, the practitioner should understand how to manage them from observation to surgical intervention7.

The best way to handle side-effects is to prevent them8. For optimum outcomes, aesthetic physicians should have: a detailed understanding of facial anatomy; the individual characteristics of available fillers; their indications, contraindications, benefits, and drawbacks; and ways to prevent and avoid potential complications9.  Hyaluronic acid dermal fillers are the most widely used injectables to augment facial volume without surgery. They are popular because of their ease of administration, predictable effectiveness, good safety profile, and quick patient recovery10. Since its reformulation in mid-1999, the biologically engineered hyaluronic acid filler Restylane (Medicis Pharmaceuticals, Scottsdale, AZ, USA) elicits less than one allergic reaction in 1600 treatments. Skin reactions, including granuloma formation with poly-L-lactic acid (Sculptra/formerly New Fill, Dermik Laboratories, Berwyn, PA, USA) is considerably less likely if a greater dilution and deeper injection technique are employed11. Inflammatory nodules are likely to be caused by a low-grade infection maintained within a biofilm surrounding the hydrophobic silicone gel and the combination gels. Aquamid gel may prevent formation of a biofilm through its high water-binding capacity, explaining why late inflammatory nodules are not seen after injection of this polyacrylamide hydrogel product11, 12. All gels act as foreign bodies. Host response ranges from a few macrophages to an intense foreign-body reaction with fibrosis, depending on gel type. For polymer gels the filling effect stems from their volume. For combination gels it stems from the intended host foreign-body reaction to the microparticles. Infectious nodules must be treated with antibiotics. Granulomas must be treated with a combination of both steroids and antibiotics or excision12. 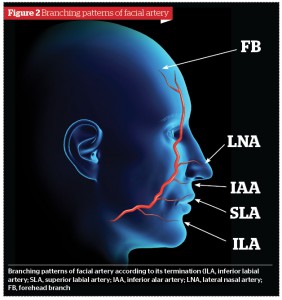 Patient was a 37-year-old woman who received HA injection to the left nasolabial fold. She had an uneventful procedure but reported back to the clinic with an erythematous reaction and some pain in the nasolabial and malar area the next day. In view of the vascular compromise she was immediately treated with 150 units of hyaluronidase and nitropaste to the reticulated area. Because the patient presented 24 hours post-procedure she was given 100 mgs of cortisone IV and commenced on 4 mgs of Dexamethasone PO. It was also considered appropriate to inject 0.2 mls of a dilute solution of 50% dexamethasone 40 mgs/ml into the area where the hyaluronic acid was initially injected.

The patient became hypotensive during treatment and was temporarily referred to the emergency room until stable. This was considered secondary to the nitropaste gel. The hospital was willing to allow the patient to come back to the clinic for further steroid treatment and commencement of Chiroxy oxygenating skin cream (Auriga international, Belgium). Chiroxy oxygenating skin cream is designed to increase the oxygen content of your skin by delivering O2 via nanosomes. Her symptoms and signs disappeared within a 5 day period and 2 weeks later there was no evidence of any residual vascular deficit. 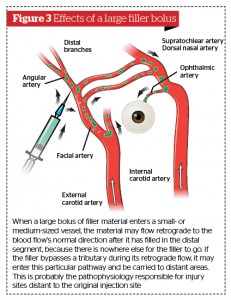 For the moment, there is no ideal dermal filler as they have widely varying properties, associated risks, and injection requirements that contribute to adverse events for the patient. The majority of adverse reactions are mild and transient, such as bruising and oedema secondary to trauma or the physical characteristics of the material itself.

However, although serious adverse events are rare, vascular complications either arterial or venous can occur that are related to volume of filler used and the technique of placement in the region of terminal vessels. It is possible that injected HA expands because of its hydrophilic action and the underlying facial artery, angular artery, or its branches, become compressed. This results in vascular compromise that can lead to skin necrosis unless it is immediately treated. The author proposes that intravenous steroids and anti-histamines should be given to all these patients.

There are also issues related to the recent use of adjunctive lidocaine in fillers that may make vessels more exposed to accidental infiltration. Lidocaine significantly decreases pain during injection and post‑injection with corresponding increased patient satisfaction13. The efficacy and safety profile of the original filler may be compromised. 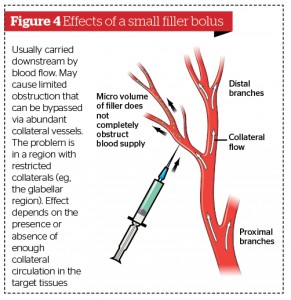 Rare complications with HA fillers include vascular compression during or after the event which results in reticulation some hours later and the author postulates the use of intravenous steroids in these patients. These patients normally show no evidence of vascular compromise during injection. The protocol outlined by Glaich et al14 calls for a coherent, sequential treatment for vascular compromise resulting from injections of hyaluronic acids. This protocol elaborates a sequence of events that use topical nitroglycerin, hyaluronidase, and other modalities to minimise the damage from impending necrosis. Other authors have also published guidelines for the treatment of impending necrosis following soft tissue augmentation following injections of hyaluronic acid15,16. Based upon the experience with hyaluronic acid occlusion, treatment for particular fillers that occlude vascular structures should seek to increase blood flow to the affected areas. This may be accomplished by decreasing pressure in the anatomic compartment (using corticosteroids and hyaluronidase), increasing blood flow (with sildenafil or similar drugs, aspirin, and nitroglycerin paste), and increasing the oxygen content to the affected tissues (hyperbaric oxygen)17.

Regarding reversal of a hyaluronic acid induced embolus, the author recommends starting at higher levels of hyalase, possibly in the region of 150 to 300 iu, and then treating repeatedly until the circulation returns. Repeated treatment, massage, and the other recommendations to promote vasodilation are continued. It is probable as the material starts to break down, it flows further downstream, where it probably opens collateral vessels, or it can flow further past these and obstruct a slightly different area. When it gets to the precapillary arterioles, it gets permanently stuck, unless it is bathed in more hyaluronidase (HYAL) and is hydrolysed.

There are so many variables in a typical case that it is impossible to be specific, since the manner of manipulation of the area, the quantity and nature of the filler within the vessel, and the actual location of the emboli all factor into the equation. The absolute quantity of hyaluronidase is probably irrelevant during an acute event, it’s the results that count.