Shape: round versus anatomical

Both round and anatomical implants are commonly used for breast augmentation. Certain patients may be better suited for a particular shape depending on her desired breast appearance. Round implants increase fullness of the breast superiorly. They are preferable for patients who have a small breast volume and want a fuller appearance, or for those who desire breasts that look overfilled. Additionally, patients who are very active can experience implant rotation, which is inconsequential when using a round shape, but can result in significant deformity with shaped implants.

For anatomical implants, more precision is required during placement as distortions are readily apparent if the implant is slightly rotated or in the sub-glandular position28. Anatomical implants however, have more variables (width, height, and projection) that can be altered to customise breast shape for an individuall4. The success of the aesthetic outcome irrespective of shape depends greatly on the development of capsular contracture, which occurs with equal frequency in both round and anatomical implants4.

For women unsure of their desired breast size or appearance, a double-lumen adjustable gel implant, available in both round and anatomical shapes, may be a preferred option given the ability to optimise for size postoperatively29.

The current silicone implants contain a cohesive gel that stabilises the implant shape in vivo, theoretically decreasing the likelihood of silicone bleed. However, implant rupture and subsequent leakage still occur, and can lead to capsular contracture owing to silicone exposure30. 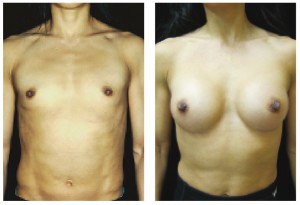 Figure 1 A young woman wished to undergo breast augmentation to give her chest a more feminine appearance. She selected silicone implants to be placed in a subpectoral pocket; (A) before, and (B) 2 months after surgery

The incision selected for breast augmentation must provide adequate access for implant placement and haemostasis while being strategically located to hide the resulting scar. Incision size depends on both location and type of implant, with saline implants generally requiring the smallest incision followed by smooth, and then textured implants requiring progressively larger incisions. As far as incision location, an inframammary approach is used in 90% of breast augmentation cases because of the ability to conceal the incision under the breast35.

Many surgeons prefer the inframammary or periareolar incision because of the ease of accessing the implant pocket35–37. In thin patients, the breast may be insufficiently sized to obscure an inframammary scar37. Additionally, Stutman et al37 showed in a cohort of 619 patients that those who had inframammary incisions were more likely to undergo reoperation for asymmetry, ptosis, or implant change. The periareolar approach also has its limitations, including poor scar formation, higher capsular contracture rates, and greater risk of desensitisation of the nipple areolar complex.37 A smaller areola may also limit the access that can be achieved through a periareolar incision making the approach less ideal.

Many patients request either transaxillary or transumbilical incisions owing to the inconspicuous nature of the scar. While aesthetically appealing, the challenge of accessing the appropriate space leads to less precision in implant placement, increased risk of infection and capsular contracture, and greater risk for damage to surrounding tissues.36–39 Additionally, the transumbilical approach requires an inflatable implant, limiting the implant choice to saline.36,37,40 To strive to reduce the length of an incision and to ease implant placement, a newly-developed funnel from Keller Medical Inc. has been developed called the Keller Funnel™ (Keller Medical Inc., Stuart, FL).41