Why is this important?

Aesthetic medicine is focused on making people more attractive, using minimally-invasive techniques. Youth is attractive to everybody; therefore, multiple procedures  aim to achieve a rejuvenating effect. Beautification procedures are more challenging and are gender-related. Recognition of ‘reproductive signals’ and sexual dimorphism elements of human appearance are essential for successful beautification.

Lips are one of the significant elements of the lower-third of the face and a focus of attention while communicating with somebody. Culturally, female lips are considered as the only visible sexual organ. When required and properly carried out, lip enhancement rejuvenates and feminises one’s appearance. It should be remembered that the lower lip is about volume, while the upper lip is about shape. The key steps for lip enhancement include the ideal proportion of 1 : 1.618 between the upper and lower lip, enhancement of the philtrum and Cupid’s bow, redefinition of the vermilion border, and building lip corner support (Figures 1 and 2). The only products currently approved to be injected for lip enhancemet are hyaluronic acid-based soft tissue fillers.

Figure 1 Enhancement achieved by following the ideal concepts of beauty (respecting the ratio between the upper and lower lip, and avoiding hyper-augmentation of the lips) adds to feminine traits. (A) Before and (B) after 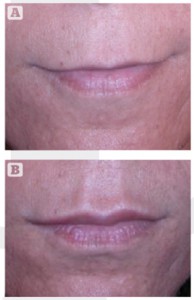 Figure 2 Augmenting the philtrum and ‘cupid bow’ shortens the upper lip’s appearance. (A) Before and (B) after

As high cheekbones are among the symbols of female attractiveness, enhancing the malar area will emphasise the femininity of a woman’s face. Malar augmentation also creates the illusion of face-lifting, thereby rejuvenating the appearance. The procedure the author uses for malar augmentation is called the ‘five star technique’ (Figure 3). 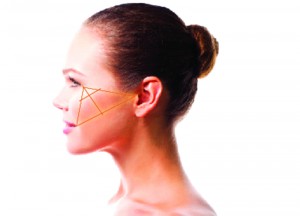 A first line is drawn between the lateral canthus and the tragus. The second line is drawn between the lateral canthus and the ipsilateral lip corner. The third line connects lip corner with the tragus. The resultant equilateral triangle is now divided into upper third and lower two thirds by a fourth line, which runs parallel to the triangle base and usually meets the tear trough deformity medially. The last line is a vertical line from the triangle vertex to its base. The augmentation plane runs along the fourth line, with a point of maximal projection being the intersection between that and the vertical. The product can either be viscous hyaluronic acid or calcium hydroxylapatite, and is injected by deep supraperiosteal depot techniques in five locations (‘stars’) along the augmentation plane. While the central star is injected with the maximum amount of a filler, adjacent stars get half the volume, and the most lateral star gets one quarter of the filler volume. As the most medial star blends into the tear trough deformity, filler volume can be increased. The procedure is completed with gentle massaging of the area (Figure 4). 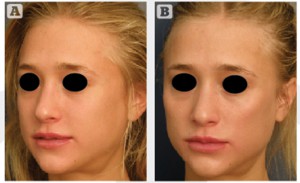 Figure 4 Facial feminisation using the five-star technique. (A) Before and (B) after