Seborrhoeic dermatitis is a common inflammatory, papulo-squamous disorder affecting areas rich in sebaceous glands such as the scalp, chest, and nasolabial folds with a chronic fluctuating course. The condition can be more prevalent in certain diseases, such as HIV-infected patients and neurological disorders. Management is chiefly with topical agents including emollients, anti-pityrosporal therapy (e.g. ketoconazole) and topical corticosteroids. Scalp disease should be addressed with appropriate formulations and medicated shampoos. This article will summarise the clinical findings, aetiology, and evidence for management in seborrhoeic dermatitis in adults.

Seborrhoeic dermatitis (SD) is a common skin disorder affecting between 1–3% of the adult population, with a higher incidence seen in male patients; those with altered immunity, such as HIV/AIDS; Parkinson’s disease; and alcoholism1. The prevalence is highest in puberty and early adulthood, followed by a second peak around the age of 50 years. It is a chronic condition characterised by a fluctuating course that may be exacerbated by certain triggers, such as emotional stress, heat, damp air, air-conditioning, winter months, and sun exposure2.

Though the disease is often mild, involvement of highly visible areas, such as the face, means that SD may be a source of considerable anxiety and discomfort for its sufferers. Successful management includes a focus on education, and an understanding of the chronic, incurable nature of the disease is essential in order for patients to be able to manage the condition long-term1.

Experimental models have indicated that individual genetically-determined immunity may invoke a maladaptive, inflammatory immune response to particular Malassezia species (or their metabolites) found on the skin, however, the exact mechanism remains largely unclear5. Human sebum is a mixture of triglycerides, fatty acids, wax esters, cholesterol, and squalene. It is currently believed that metabolites produced by Malassezia species such as oleic acid, malssezin, and indole-3-carbaldehyde break down the sebum constituents into monoglycerides, diglycerides and free-fatty acids. The latter may play a key role in the initiation of the inflammatory response seen in SD6. Although the exact mechanism is unclear, it is believed that this is partly due to down-regulation of the high-affinity epidermal growth factor receptor and the differentiation of Th17 cells and the production of inflammation7.

Further support for the link between Malassezia species and SD has been provided by demonstrations of therapeutic efficacy for antifungal drugs such as ketoconazole as explained below.

In summary, it is currently largely believed that SD occurs as a result of a number of factors, which include the presence of Malassezia species, host susceptibility factors, sebum secretion, and an inflammatory response resulting from the effects of the Malassezia metabolities.

Seborrhoeic dermatitis typically presents as inflamed, erythematous patches or thin plaques associated with overlying ‘greasy’ scales in areas rich in sebaceous glands, with predilection for the scalp, behind the ears, eyebrows, nasolabial folds, and anterior chest. Large flexures, such as the groin and axillae may also be involved, and pruritus can be present in some cases. Severe widespread disease and erythroderma are rarely seen but can occur often as an acute manifestation of SD, particularly in the context of HIV. Blepharoconjunctivitis (chronic inflammation of the eyelid and conjunctiva) may occur in association with SD and can manifest with a burning sensation, irritation, tearing, photophobia, blurred vision, and red eyes with complications that may include corneal erosions8. Patients with significant eye involvement should be referred to an ophthalmologist for an opinion.

Disease exacerbations can occur with exposure to heat, sun, oral steroids or overly aggressive topical therapy. Common ‘dandruff’ may be difficult to distinguish from mild scalp SD, but characteristically refers to isolated scaling of the scalp without visible inflammation or erythema. As with SD, the severity of dandruff can be variable and may be associated with significant symptoms including pruritus. Similarly with SD, Malassezia species are believed to contribute to the aetiology of dandruff and anti-pityrosporal therapy in this case can be helpful5.

The diagnosis of SD is primarily made on clinical appearance and diagnostic skin biopsy is rarely necessary. Microscopy of skin scrapings using potassium hydroxide may reveal hyphae and yeast spores of Malassezia. Since identification of Malassezia to the species level has no clinical implication or influence on the choice of treatment and is therefore, although interesting from an epidemiological perspective, not regarded necessary for routine purposes and is not recommended in daily clinical practice. Practitioners should consider possible risk factors, including excessive alcohol consumption and underlying illnesses such as Parkinson’s disease and HIV. Seborrhoeic dermatitis — particularly in its severe form — can be a presenting feature of HIV in patients not previously known to be infected. Discussion of risk factors and serological testing for HIV should be considered in selected patients, particularly in widespread severe disease and/or patients refractory to therapy7. In adults and infants, zinc deficiency may produce similar clinical appearances to SD. Assessment of serum zinc levels should be considered particularly if concurrent gastrointestinal symptoms are present, but are not required routinely9.

Emollients and the use of soap substitutes can be helpful supportive treatments for SD. First-line active therapy is primarily with anti-yeast medications alone or in combination with topical corticosteroids.

Anti-pityrosporal therapy exerts its effect through the reduction of Malassezia proliferation and the subsequent inflammatory response10. They can be divided into polyenes, azoles, and allylamines and all tend to exhibit their effects in one way or other on ergosterol, which is a component of the fungal membrane11.

Ketoconazole is the most studied anti-pityrosporal medication. Typically, a formulation of 2% ketoconazole is applied once or twice daily to affected areas. Ketoconazole creams, gels, and foams have been shown to be effective in the treatment of SD on the face, scalp, and flexures and demonstrated similar efficacies to topical corticosteroids12. Systemic treatment can be initiated as daily treatment followed subsequently by ‘pulsed’ maintenance treatment if required. Ketoconazole has been used at a dose of 200 mg/day for 4 weeks. ‘Pulsed’ treatment implies the intermittent, non-continuous use of the drug.

Terbinafine can be used as a dose of 250 mg/day for 4–6 weeks and in its ‘pulsed’ mode at a dose of 250 mg/day for 12 days a month for 3 months. Itraconazole is often used at an initial dose of 200 mg/day for 7 days and in its ‘pulsed’ mode at 200 mg every 2 weeks or for 2 consecutive days once a month. Due to the inconsistencies in the studies and the wide variation in the dose(s) and duration used, it is not possible to draw statistical conclusions when comparing the systemic agents used in SD.

Topical corticosteroids can be used alone or in conjunction with anti-pityrosporal therapy as above. Comparative studies suggest that topical ketoconazole is of equivalent efficacy, but associated with fewer side-effects13. Thus, when topical corticosteroids are applied, preparations should be of an appropriate potency for the body site being treated and restricted to short courses to minimise the risk of side-effects. Mild preparations (such as hydrocortisone) should be used for the face with moderate potency formulations for the extra-facial areas.

Second-line topical therapies include: ciclopirox olamine cream, metronidazole gel, benzoyl peroxide, terbinafine and topical calcineurin inhibitors2. Other azole anti‑fungals, such as bifonazole, miconazole, and sertaconazole have also been shown to be helpful14. For severe disease, oral antifungal agents such as itraconazole or terbinafine can be considered. Regimens have included short courses, and maintenance ‘pulse’ treatments have been used with appropriate monitoring12.

In the author’s experience, calcineurin inhibitors have shown to be very effective as prophylaxis in recalcitrant or relapsing SD cases, which respond poorly to anti‑pityrosporal or anti-inflammatory agents.

As with non-scalp disease, appropriately formulated anti‑pityrosporal preparations are the first-line therapy for SD. Lotions, foams or shampoos are more suited to hair-bearing areas like the scalp and have also been shown to be useful for controlling simple dandruff15. Ketoconazole shampoo 2% has been shown to be more effective than the 1% formulation and of equivalent efficacy to 2% miconazole nitrate shampoo and selenium sulphide but with fewer irritant effects compared to the latter. Studies have shown conflicting and inconsistent results regarding efficacy regarding ketoconazole, selenium sulphide, and zinc pyrithione 1% shampoo16.

Topical corticosteroids can be helpful for settling inflammation on the scalp, but frequently require more potent formulations compared to non-scalp disease. Examples include: betamethasone valerate 0.1% foam and clobetasol propionate 0.05% shampoo. Tacrolimus 0.1% ointment has also been used on the scalp, but application may be more difficult compared to non-scalp areas17.

In addition, ciclopirox and tea tree oil shampoos have been used and there is some evidence for the efficacy of propylene glycol lotion, though this is rarely used18.

Despite the fact that anti-pityrosporal and anti‑inflammatory therapies are well-established and effective in the treatment of SD, a number of novel therapies have been tried.

Recently, the efficacy and tolerability of 0.2% hyaluronic acid (HA) salt gel in SD was evaluated in a clinical trial with good success19. It is believed that low-molecular weight HA (LMWHA) exerts its beneficial effect on SD through its effects on the innate immune system. DEFβ2 is a peptide observed in epithelial cells and is induced by bacterial infection and is widely believed to have antimicrobial properties. In the event of skin injury, LMWHA fragments are released into the skin by the process of degradation of the extracellular matrix and are believed to be a potent inducer of DEFβ2 when applied topically to the skin. It is believed that skin treated with increasing concentrations of LMWHA induce a progressively higher antimicrobial effect when compared to untreated skin.

Topical nicotinamide 4% can have a potential for the treatment of SD as shown in a single study, possibly through its anti-inflammatory effects20. A topical gel with 4% Quassia amara botanical extract (possibly through its anti-inflammatory and anti-pityrosporal effects) was also used with some success in the treatment of SD21. 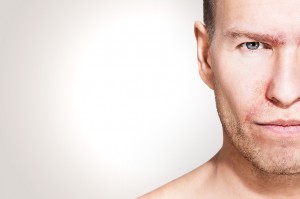 A novel shampoo containing extracts of Rosa centifolia petals and Epigallocatechin gallate has been used successfully in the treatment of SD with results from a randomised trial showing comparable efficacy to that seen with 1% zinc pyrithione and 2% ketoconazole shampoo22. It is believed that the extracts contain anti‑oxidative, anti-inflammatory, and anti-pityrosporal effects leading to the observed improvement in SD.

SD is a chronic, inflammatory papulo-squamous condition with variable severity and a fluctuating course. The diagnosis is usually made on clinical grounds, but in selected cases assessment should include enquiries about risk factors including HIV, stress, and excess alcohol intake. The clinical history should include assessment for eye symptoms, as associated blepharoconjunctivitis may occur. In rare cases, zinc deficiency can give rise to a condition that clinically mimics SD albeit in a more severe or refractory form.

SD typically presents as ill-defined patches of scaling and redness on the eyebrows, nasolabial folds, and behind the ears and scalp, though the groins and flexures may also be affected. Involvement of visible areas of the body makes SD a source of considerable concern to patients. Treatment focuses on patient education, avoidance of exacerbating factors and alleviation of symptoms chiefly with topical therapies. First-line agents for scalp and non-scalp disease include ketoconazole and topical corticosteroids appropriately formulated for the site of use. Advanced therapy includes the use of alternative antifungal agents (topically or systemically) and off-licence application of other agents including topical calcineurin inhibitors.

The effects of cosmeceuticals in reversing dermal injury

Microneedling in the medical and cosmetic field