Techniques for injections to the hands

ABSTRACT
After the face, the hands are the most conspicuous part of the human body. With patients achieving a younger appearance from facial rejuvenation treatments, a ‘gap’ between a youthful face and aged hands becomes apparent, with the hands often revealing a person’s true age. As a result, rejuvenation of the hands is becoming an increasingly popular treatment.

Method
Different injection techniques have been described for the volumisation of the hands with filling materials. This article aims to review the literature and discuss the advantages and disadvantages of these techniques, as well as the use of sharp needle versus blunt cannula relating to new anatomical insights.

Discussion
The dorsum of the hand has a very complex anatomy, a three-dimensional net-shaped fascial framework with the dorsal superficial fascia partly attached to the dermis. The extensor tendons are located within the deep layer, in which no filling material should be placed owing to the risk of compression and dysfunction. Therefore, the only optimal and safe layer in which to deposit the filling material is the underface of the dermis. On first sight it may appear easier, faster, and more comfortable to use a needle, especially in a bolus technique. However, as the fascia sticks to the skin at some points, the deeper layers containing the functionally essential structures may arise with skin ‘tenting’, resulting in a higher risk of complications, especially when using a sharp needle. Therefore, a blunt cannula appears to be the right tool to ensure staying in the correct injection layer, thereby minimising the risk of damage to nerves and blood vessels, or even worse complications.

Conclusions
Hand augmentation continues to be a challenge with regard to the best injection technique. Every physician should have an exact knowledge of anatomy, product characteristics, and injection techniques before starting the treatment. Furthermore, the choice of treatment should take into account the personal experience of the physician, as well as possible previous treatments.

The hands are the second most often seen body part after the face and are nearly always visible. They are, therefore, of significant aesthetic importance. Furthermore, the hands are decisive for the dominance of the human species; they are a symbol of beauty, an indicator of character, and a communication tool.

With regard to aesthetic treatment, for a long period of time the primary focus was the face, often resulting in aged hands becoming even more visible as a disparity emerged between them and the younger looking face. This difference in appearance becomes a clear indication of incomplete cosmetic work. 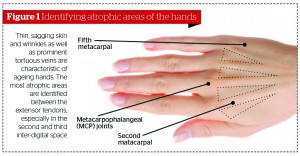 Figure 1: Thin, sagging skin and wrinkles as well as prominent tortuous veins are characteristic of ageing hands. The most atrophic areas are identified between the extensor tendons, especially in the second and third inter-digital space

In the past, the primary concern for hand surgeons was the restoration of function1. Recently, attention has turned to hand rejuvenation, as they are believed to show the individual’s true age.

Hand ageing can be described as a three-dimensional (3D) process that involves osseous and subcutaneous structures, as well as the skin2. In patients’ opinions, the removal of veins resulted in significantly younger looking hands, whereas the addition of make-up and jewellery did not, revealing that the appearance of veins is believed to be one of the most prominent characteristics of aged hands3. Recently, a validated five-point hand grading scale (0–4) determining the severity of the ageing hand’s appearance has been published4, and may serve as a helpful tool for physicians to develop the best individual treatment plan. 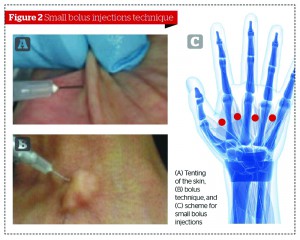 Figure 2: (A) Tenting
of the skin,
(B) bolus technique, and (C) scheme for small bolus injections

First, the injection procedure has to be performed under sterile conditions, consisting of washing hands with soap, and disinfection with isopropyl alcohol or corresponding antiseptic solution.