Ghislaine Beilin evaluates the use of microneedling radiofrequency  along with non-thermal electrical energy to achieve increased collagen regeneration, dermal volumizing, and wrinkle reduction.

Demand for skin rejuvenation and anti-ageing procedures with minimal downtime and low risk has led to the development of non-surgical treatment methods for wrinkles, scars, and general facial enhancement. In the past few years, fractional radiofrequency (RF) systems have been introduced that enable controlled skin resurfacing. The new Hybrid Energy™ (HE) microneedle technology delivers thermal and non-thermal electrical energy creating micro-ablation zones in the deep dermis, which promote a natural fractional healing process for dermal refilling and skin renewal with minimal to no pain or downtime.

A  wide variety of non-surgical techniques are used for skin rejuvenation in order to improve the appearance of facial wrinkles, acne scars, and skin imperfections. These include non-ablative lasers, intense pulsed light (IPL), and radiofrequency technology, among them are the Apollo™ and Maximus™ (Pollogen, Israel) systems based on the TriPollar® RF technology, which are widely used for a number of skin treatment indications with dermal collagen remodeling achieved through a thermal process1–8. These non-ablative procedures are considered as having a high safety profile and moderate clinical effect. On the other hand, ablative resurfacing lasers such as carbon dioxide (CO2) lasers and erbium: yttrium-aluminum-garnet (Erbium: YAG) lasers used to be the gold standard for minimally invasive treatments. However, these treatments were associated with significant downtime and relatively high risk of side-effect9–12, especially on dark and Asian skin types.

From lasers and contact radiofrequency to minimally invasive microneedles

The demand for new procedures delivering visible clinical improvements with reduced downtime, has led to the development of fractional lasers13–14. Instead of treating an entire skin area, these lasers treat a condensed matrix of small ‘islets’ of tissue leaving intact skin in-between. Healing is initiated from these intact skin areas resulting in reduced downtime and reduced complications. Since the introduction of the first fractional laser system, a myriad of ‘fractional’ laser systems, mostly based on CO2 and Erbium:YAG laser technology, have been developed and cleared for marketing worldwide15.

In recent years, several fractional RF systems have been introduced that allow controlled fractional skin resurfacing by employing a matrix of miniature RF electrodes placed in contact with the skin surface. In addition to the epidermal effect, fractional RF systems allow for an enhancement of the dermal layer via volumetric heating leading to an effective micro-ablative skin resurfacing and the improved appearance of wrinkles, fine lines, and acne scars.

Recently, new devices employing minimally invasive bipolar micro-electrodes that are percutaneously introduced into the skin, were introduced to the market for the treatment of wrinkles and skin laxity16–19. Published studies revealed that such treatments induced an active dermal remodeling process including neoelastogenesis and neocollagenesis with an intact epidermal layer16–19.

The energy is delivered via an array of microneedles 0.6 mm in length. There are two types of needle tips: 6×6 microneedles (total of 36) or 6×2 microneedles (total of 12) to treat small focused and delicate areas. The RF energy may be adjusted according to the individual’s needs by controlling the power (up to 62 mJ/pin) and the exposure time (units in ms). Pulses may be overlapped, and several passes may be performed.

The penetration of the needles with the radiofrequency energy, followed by an electrical current create a wound effect. The skin generates a healing process leading to fibroblast activation and promotes the production of new collagen and hyaluronic acid.

The microneedles penetrate the skin enabling efficient, uniform, and homogenous penetration coverage with minimal to no pain or bleeding. HE (microneedles and electrical energy) creates invisible microwounds in the dermal layer characterized by optimal dermal impact and minimal epidermal effect. The microwounds are surrounded by healthy unaffected skin areas, which function as healing centers promoting effective neocollagenesis and skin renewal. The Hybrid Energy treatment triggers the body’s natural healing response mechanism in a safe and effective process, with minimal pain and side-effects.

The combination of RF and an additional non-thermal electrical energy enhances skin penetration as well as the clinical effect and wound healing process. An increased energy input is achieved without increasing RF heating but through a chemical reaction. The electrical energy stimulates a chemical reaction between the skin’s fluids and salts. A controlled, mild change of pH (generating an alkaline environment due to generation of OH), occurs in the dermis. This chemical change creates fractional, cold electro-coagulation zones in the tissue.

Recently, three peer reviewed papers were published; the first, ‘Ex vivo study of hybrid energy technology using a human skin model’, published in the European Journal of Dermatology, 2014, validated significant collagen remodeling and an increase in hyaluronic acid with the use of hybrid energy20. In other words, natural volume achieved from within together with a significant increase in epidermal renewal. The second study, ‘VoluDerm microneedle technology for skin treatments — in vivo histological evidence’, published in the Journal of Cosmetics and Laser Therapy, 2015, presented immediate epidermal and dermal effects and complete healing of the ablation zones after 14 days for all energy levels21. In the third and final study, ‘Voluderm microneedle technology for treating skin laxity and wrinkles — initial clinical experience’, published in Jacobs Journal of Experimental Dermatology, 2015, Dr. Shapiro shares his clinical experience and concludes that VoluDerm is a safe and effective microneedle technology for dermal volumizing and the treatment of wrinkles with minimal pain and no downtime22.

According to the author’s clinical experience, HE provides a fractional cold denaturation of dermal protein, through alkalizing and tissue apoptosis. HE microneedling creates micro-column punctures. These columns of mechanical punctures are not bordered by thermal coagulation tissue and allow infusion of the mesolift product to increase the efficacy of the procedure and protein synthesis. 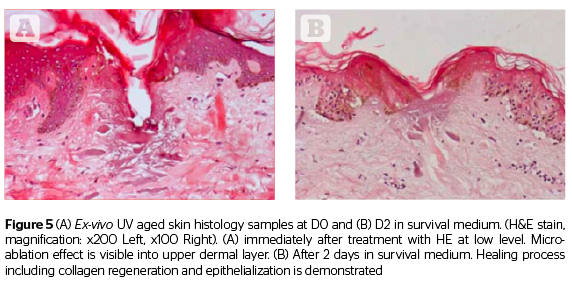 In the author’s clinic, HE technology is commonly combined with the application of various substances such as hyaluronic acid (Figure 1). When comparing the effect of the infusion methods of other products, such as mesotherapy treatments, the infusion was found to be more effective using the HE technology, which was shown to have less downtime, fewer side effects, and a smaller pain level. With the HE technology the ablation zones remain vital, and the stimulation of the healing process due to the emitted energies may facilitate absorption of applied substances. In addition, the healing process following mesotherapy may be longer with a greater risk of infection as the needles used are normally thicker.

Unlike other technologies, the author is able to treat areas that are prone to side effects or contraindicated with other technologies, such as the tear trough area (Figure 2), the thorax, and glands in the neck allowing full neck tightening (Figure 3) and skin renewal, as well as smoker’s lines and lip volumizing in a natural, substance free manner.

Expected results of the HE treatments are significant dermal refilling, and a reduction of wrinkles including nasolabial wrinkles and perioral and periorbital lines. Skin texture improvement presented as radiant skin, smaller pores and dermal volume increase can also be expected.

No undesired side effects were experienced by any of the patients, they all described the treatment as comfortable and in most cases the author did not use any numbing cream. Three to five treatments were usually performed, spaced 1–2 weeks apart.

The new novel Hybrid Energy™ Technology delivers thermal and electrical energies to create controlled micro ablation zones penetrating to the mid-dermis. HE treatments promote a natural fractional healing process for dermal volume refilling and skin renewal. The author performed HE treatments that demonstrated skin refilling effect along with improvement of skin texture and irregularities. No significant adverse effects were detected and treatments were well tolerated by patients with minimal to no pain and no downtime. 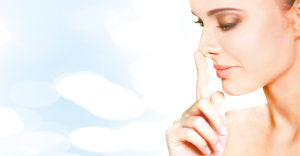 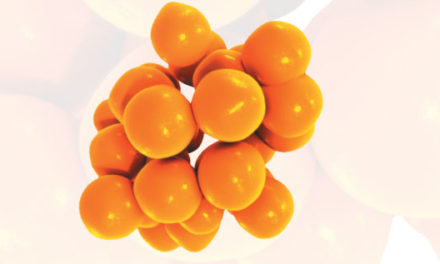