Skin parameters in cosmetic medicine: a new point of care

Skin biological parameters are usually measured with scales or digital photographs, but in recent years new devices based on physical and chemical principles have been developed to better define the effectiveness of drugs and instrumental therapies. The authors recruited 20 patients to perform a dermatologic evaluation with a new skin measuring device (Skin Tester). Skin Tester is a reliable and useful tool for clinical investigations in different medical and surgical branches, and provides the opportunity to stardardise skin pathology in different clinical environments.

Characteristics of the skin and changes as a result of ageing are usually measured using scales or digital photographs, with data comparison before and after a specific treatment. In recent years, however, some instruments based on different physical and chemical principles have been developed, in order to have a more reliable evaluation to define the effectiveness of drugs and therapies.

To identify specific pathological skin parameters, it is important to be cognisant of the changes which the skin undergoes during ageing. Waller and Maibach1,2 described the features of the different layers of the skin and their biochemical alterations during the ageing process (proteins, glycosaminoglycans, water, lipids).

The age-related changes of the skin have been analysed on the basis of biochemical modifications.

Collagen, which includes approximately 70–80% of the dry weight of the dermis, is responsible for the skin’s tensile strength. Each collagen molecule consists of three polypeptide chains, containing approximately 1000 amino acids in their primary sequence. In collagen molecules, the α-chains are wrapped around each other to achieve a triple helical formation2.

The ratio of types I and III collagen fibres in the skin remain constant throughout childhood and young adult life. However, as we age, the proportion of type III collagen in the dermis increases and the bundle width changes significantly, reflecting an impaired synthesis of type I collagen in older skin3.

Oikarinen4 showed that collagen synthesis gradually declines in chronologically aged skin, and in protected skin the epidermis becomes thinner, especially after the seventh decade of life. On the contrary, an excessive exposure to sunlight may cause severe photoageing as early as the second decade of life. 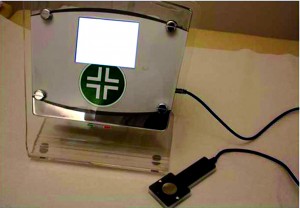 Gniadecka et al5 also investigated the subepidermal low-echogenic band, a consistent echostructural band found in the aged and photodamaged skin of 23 older, healthy volunteers (75–100 years old), with a high-frequency ultrasound scanner (B-mode, 20 mHz). The thickness of this band may reflect the degree of cutaneous ageing and can be used to monitor the severity of photoageing. The authors collected images from the volar forearm twice per day, in the morning and 12 hours later. A significant inter-individual and circadian variability of the band echostructure was demonstrated, suggesting that it is involved in the redistribution of fluids in the aged dermis.

According to Uitto6, two independent factors — innate ageing and solar exposure — are responsible for cutaneous ageing and consequently, degenerative changes. Furthermore, a decrease in collagen biosynthesis and fibroblast proliferative capacity caused a reduction of collagen deposition, with the development of dermal atrophy related to poor wound healing in the elderly. At the same time, alterations in the molecular organisation of the elastic fibre network lead to changes in skin mechanical properties, with consequent reduced skin resilience and elasticity.