Optimising the efficacy and comfort of laser hair removal treatment

For years, hair removal has been the top cosmetic laser procedure, only being surpassed in 2012 by laser photorejuvenation as the most commonly performed aesthetic laser procedure (2012 American Society for Dermatologic Surgery, Procedure Survey). New, more automated systems are helping simplify laser treatments for physicians and their supervised staff, which makes the equipment more appealing and easier to use in the office to address the demand for laser hair removal (LHR).

Physicians who wish to maintain or increase their share of the laser hair removal market must find ways to differentiate themselves from competitors and to offer a treatment that is optimised for efficacy and comfort. While a practitioner’s skill and expertise play a large role in the treatment experience, the choice of laser hair removal system also has a significant impact on patient satisfaction in both the near and longer term. Data also indicate that the two LHR areas with which physicians are most concerned are patient pain and efficacy (Medical Insight, Inc., Global Aesthetic Market Study, 2013).

A number of published clinical studies have evaluated the efficacy of the LightSheer systems, alone or in comparison with other LHR systems.

A study conducted in 29 Chinese women compared the safety and efficacy of the LightSheer (LS) 9mm x 9mm ChillTip handpice (LSET) with a 1064nm Nd:YAG laser system1. In this study, each woman served as her own control, with one axilla treated with the LSET and the other treated with the Nd:YAG laser. Patients were treated three times, each at 4-week intervals. Cold lubricating gel was applied prior to treatment with the LSET.

Reported outcomes in this study included hair shaft diameter, regrowth rate, hair reduction, and treatment-associated pain, which were assessed before the first treatment, and 4 weeks after each of the three treatment sessions. Hair reduction as a percentage of the quantity of hair present at the start of treatment was significantly greater for the LSET compared with the Nd:YAG laser at first (60.09 ± 15.84% versus 41.44 ± 18.37%) and second follow-up (78.56 ± 11.28% versus 64.50 ± 12.83%).

Hair reduction was not calculated at the third follow-up visit because the amount of regrowth at that time point was insignificant. This study provides evidence that the LightSheer more effectively reduces the amount of hair compared with an Nd:YAG laser.

Another study compared the LSET handpiece with the Lumenis LS High-speed (LSHS) handpiece2. Although both systems use an 800nm diode laser, compared with the LSET, the LSHS has a bigger spot size (22mm x 35mm versus 9mm x 9mm respectively) and lower energy density (4.5–12J/cm2 versus 10–100J/cm2).

Additionally, the LSET minimises pain through the use of contact cooling (ChilTip™ Technology), while the LSHS achieves this objective through the use of vacuum-assisted HIT™ (High-Speed integrated Technology). In this study, 36 Chinese women had one axilla treated with the LSET and the other treated with the LSHS. Each axilla was treated three times at 4–6-week intervals.

Hair reduction and patient-reported pain scores were assessed at each visit. Three months after the final treatment, there was no significant difference in the hair reduction rate between the LSET and LSHS-treated sides (72 ± 18% versus 73 ± 18%), although pain scores were lower with the LSHS. These results demonstrate that the reduced energy density of the LSHS does not compromise efficacy of hair reduction, even though it provides patients with a more comfortable treatment experience.

The impact of the large spot size and vacuum-assisted HIT™ used in the LSHS has further been evaluated in clinical trials. In one study, 34 women underwent axillary treatment with the LSHS for three treatment sessions at 4- to 6-week intervals3. 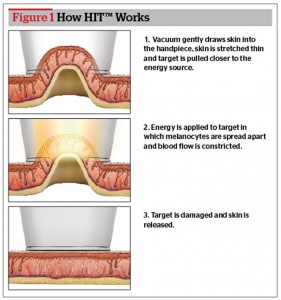 The authors hypothesise that the technological advances incorporated into the LSHS correlate with greater patient and physician satisfaction. This is partly owing to the large spot size of the LSHS, which reduces the number of pulses required to cover a desired area and enables faster treatment times, as well as to a favourable pain profile (Figure 1).

Although the LSHS handpiece uses a lower level of fluence (12J/cm2), it was shown to provide comparable hair reduction results to the LSET (25–30J/cm2) with 3-month follow-up after five treatment sessions4. Halachmi et al and Lapidoth attribute this to a number of factors, as the effect of the vacuum in creating a three-dimensional geometry combined with the gold platted chamber improves the delivery of the light relative to the flat surface of the LSET4.

In contrast to the growing body of peer-reviewed literature that supports the efficacy of the LS technology, the only efficacy data available for the Vectus system appear in a non-peer-reviewed, company-written paper, which describes a single, eight-patient study5.

In this study, the eight patients served as their own controls, with the LS used to treat one axilla and the Vectus used to treat the other. The patients were subdivided into two groups, with four undergoing treatment with the small optics of each system, and four undergoing treatment with the large optics. Although the authors state that there was a statistically significant difference in hair reduction 6 months following completion of all three treatment sessions (18 ± 16%; P < 0.01), favouring the Vectus system, it should be noted that this value reflects data from all eight patients even though treatment varied among subjects.

Additionally, no data are provided on the average fluence for the eight patients. The small overall sample size of this study and the even smaller sample size for the treatment subsets make it difficult to draw definitive conclusions about the efficacy of the different systems relative to each other and calls the statistical analysis into question, as does the lack of a standard error analysis for their average values of hair reduction in the various treatment groups.