Lip rejuvenation for a patient with Systemic Scleroderma

Systemic sclerosis (SSc) is a systemic autoimmune disease characterized by excessive deposition of collagen and other connective tissue macromolecules in skin and internal organs, prominent and often severe fibroproliferative alterations in the microvasculature, and numerous humoral and cellular immunologic abnormalities. The disease is characterized typically by facial lesions, such as telangiectasia, as well as xerostomia, a beak-shaped nose, reduced aperture of the lips (microcheilia), and limited mouth opening (microstomia). There m 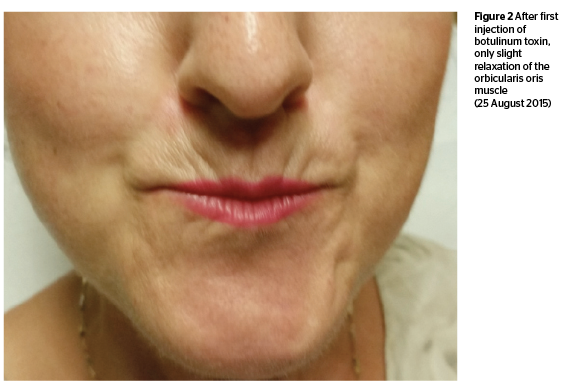 ay also be radial furrowing around the mouth. As the skin thickens and hardens, the patient’s face develops an expressionless, mask-like stiffness and ‘mummified’ appearance1,2,3. This is the result of progressive fibrosis of the skin, especially with the accumulation of collagen I and III, as a result of immunologically-induced hyperactivity of fibroblasts1,3. These  changes provide high discomfort and a lower quality of life. The occurrence of depressive symptoms in patients with SSc ranges from 36% to 65% of patients4.

Full, well defined lips symbolize youth, beauty, attractiveness, and sensuality. Conversely, thin and flat lips create the illusion of emotional coldness, stress, advanced age, and are considered unattractive5. A present canon of beauty for Caucasian lips is determined by the ideal vertical height ratio of the upper lip to the lower lip which is 1:1.6 and a well defined Cupid’s bow5,6. However, the most important aspects are the individual characteristics of the patient, which must be taken into account during the procedures for lip augmentation.

A 50-year-old female with systemic scleroderma volunteered to undergo treatment to correct the shape of her mouth. Developing microstomia due to SSc caused the patient lower self-esteem, depressed mood, and lack of self-acceptance.

The patient developed Raynaud’s phenomenon in 2006, and has experienced swelling and pain in her joints, as well as periodic fevers since 2009. In addition, the patient complained of chronic dry cough, difficulty in swallowing, bloating, and dryness of the mouth and vagina. Finally, in March 2012, she was diagnosed with systemic sclerosis due to lung fibrosis and bronchiectasis, without evidence of pulmonary hypertension. The patient was treated with corticosteroids, then azathioprine with anemia and leucopenia during therapy, and since April 2013 she has received mycophenolate mofetil 1 g b.d with good tolerance and clinical improvement. 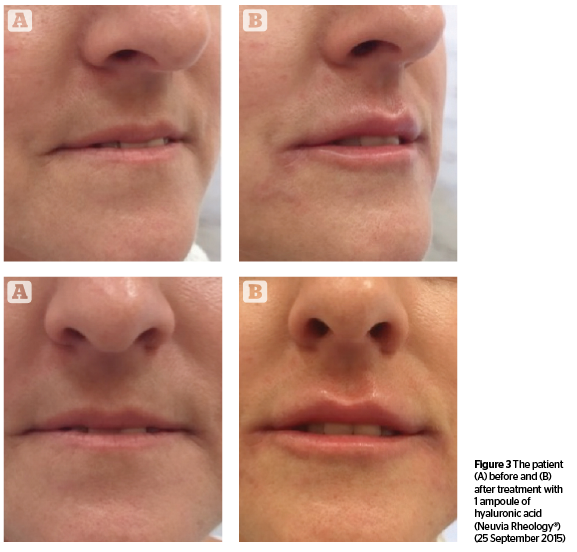 After a lengthy discussion with the patient about the risks, benefits, and alternatives, the patient agreed with the use of hyaluronic acid to correct her lips. We obtained  written consent for the procedure and took photos. First, we performed the injections of botulinum toxin in the orbicularis oris muscle: four points above the upper lip and two points below the lower lip with 2 units onabotulinumtoxinA (Vistabel®, Allergan Ltd, Marlow, UK). We obtained only a slight relaxation of the muscle, so the procedure was repeated, using the same dose of Vistabel®, this time with good effect. Next, after 4 weeks, the patient was given 2 ampoules of hyaluronic acid (Neauvia Rheology®, Neauvia, Warzaw, Poland) in two sessions, 7 weeks apart. The patient tolerated the hyaluronic injections well with no side-effects reported during the 6-month follow-up, while the positive effects of the treatment were still visible. She was satisfied with the results of treatment and still remains under the care of our clinic.

Combining fillers with botulinum toxin is ideal for rejuvenation treatments. Hyperactive or hypertonic muscles play an important role in the formation of wrinkles, and it is important to relax them with botulinum toxin, and then inject with fillers perhaps 2 weeks later7. In cases of microstomia due to scleroderma, increased levels of orbicularis oris muscle tension is observed1,7.

In the current literature there are a few reports about use of botulinum toxin (BTX-A) in the treatment of scleroderma. Le et al., described the case of a 40-year-old patient with the localized form (morphea profunda), which involved subcutaneous tissue and muscles. Due to the tissues affected by the disease, the patient developed secondary fibrosis and experienced a negative effect on their brachial plexus and subclavian vessels, causing thoracic outlet syndrome (TOS). Botulinum toxin injection provided dramatic relief, allowing avoidance of invasive surgery8. Botulinum toxin is also used in the treatment of Raynaud’s phenomenon, associated systemic scleroderma, and the treatment of digital ulcers due to sclerodactyly9,10. 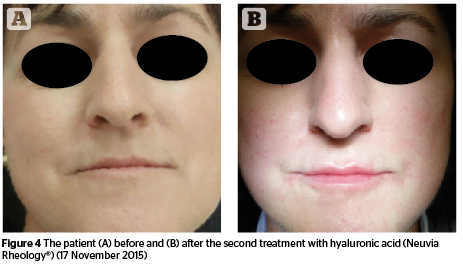 In addition to the blockade of acetylcholine release in the cholinergic neurons, BTX-A acts well on non-cholinergic neurons. This causes the blockade of the neurotransmitters, such as substance P, glutamate, and calcitonin gene-related peptide (CGRP), and this effect is used to treat chronic pain. In contrast, the usefulness of BTX-A for the treatment of Raynaud’s phenomenon is in its ability to block the sympathetic nerve with a relaxation of the vascular smooth muscle, leading to their extension10,11,12.

Hyaluronic acid is an anionic, non-sulfated glycosaminoglycan distributed widely throughout connective, epithelial, and neural tissues. Its main advantage is identical molecular structures in all living organisms, which doesn’t lead to immunogenicity. Crosslinked hyaluronic acid is ideal to fill soft tissues, since it reduces the rate of degradation and retains a high water absorption13. Delayed hypersensitivity reactions after administration may occur after weeks, months, or even years. It is, in fact, a ‘foreign body reaction’ in order to isolate and prevent the migration of substance that can’t be removed by enzymatic degradation or phagocytosis. As a result, an infiltration of monocytes and macrophages, which release inflammatory cytokines leads to multinucleated giant cells, characteristic of granulomas14,15. The ideal material for the injectable formulation should be non-immunogenic, biocompatible and stable in the implantation site, with minimal risk of complications. The closest material to that is hyaluronic acid, which as a filler shows not only excellent efficacy in correcting wrinkles, but is recognized as the safest.

There are no reports in the literature on the relationship between the use of hyaluronic acid and the development of autoimmune diseases, such as dermatomyositis, systemic lupus erythematosus, rheumatoid arthritis, and progressive systemic sclerosis16. In contrast, there are many reports regarding treatments for the facial defects caused by scleroderma (morphea en coup de sabre, facial hemiatrophy), performed with complete success and no delayed reactions17,18,19.

Onesti et al., treated 5 patients with fat transplantation to treat microstomia and compared the effects of treatment with injections of autologous adipose-derived stromal cells (ADSCs) in a second group of 5 patients. They observed good results using both methods20. 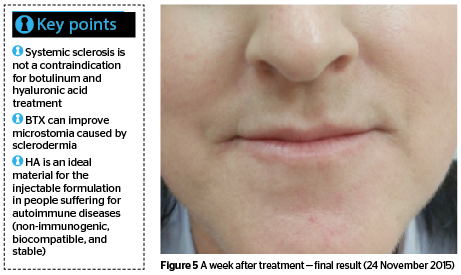 In turn, Del Papa et al., compared two methods for the correction of microstomia, one using autologous fat tissue grafting (AFTG), and the other hyaluronic acid. The procedure was performed in 30 patients with diffuse systemic sclerosis (dSSc). Fifteen patients were given perioral AFTG and 15 patients hyaluronic acid with a repetition of the filler treatment after 3 months. Before both sets of treatments and 3, 6, and 12 months after the treatments, measurements were taken of the circumference and mouth opening (measurement of the distance between the edges of the incisors) significant improvement was observed (p <0.001) in the AFTG group. In addition, after examination of videocapillaroscopy images and skin histopathology examination of the AFTG group, it was clear treatment had led to significant skin neovascularization and partially restored skin structure. All these effects were confirmed in the long-term observation21. A lack of functional and biological effects in the control group treated by HA filler was also observed.

Filling soft tissue is not only an aesthetical procedure, but it may be used for the treatment of facial defects caused by trauma and disease. Currently, autoimmune diseases aren’t contraindications to use fillers. Our experiences can open up new treatments to help patients suffering from scleroderma and change the therapeutic approach to this disease not only to obtain clinical improvement, but also to look at the disease from the aesthetic aspect. Currently, the consensus of world experts in dermatology, found no absolute contraindication to use hyaluronic acid in cases of scleroderma22.