Glycation and ageing: measurement and treatment

Ageing is a multifactorial process where genetic, endogenous, and environmental factors play a key role. Skin is the largest organ of the human body, and is not only responsible for its youthful appearance, but also its various physiological functions. Aged skin shows disturbed skin permeability, angiogenesis, lipid and sweat production, immune function and vitamin D synthesis, as well as development of precancerous lesions and oncogenic transformation1. The effect of sugars on ageing skin is governed by the simple act of covalently cross-linking two collagen fibers, which renders them both incapable of easy repair.

As we age, our skin becomes dryer, thinner, and photodamaged spots are more pronounced. This overlapping depends on epigenetic and genetically determined factors. There are two basic types of skin ageing: intrinsic (or chronological, which are individual and genetic) and extrinsic (or environmental, caused by ultraviolet light, radiation, xenobiotics, pollutants, etc.). One such extrinsic factor associated with premature ageing is the accumulation of advanced glycation products  (AGEs)2. 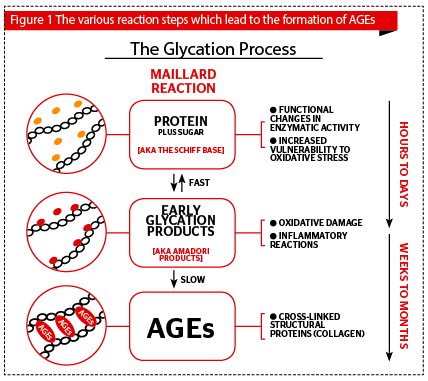 There are two vital specific differences between biochemical processes glycosylation and glycation. Glycosylation is a non-enzymatic spontaneous physiological process; while glycation is a slow, non-enzymatic reaction that takes place between free amino groups in proteins primarily from lysine and a reducing sugar (glucose and ribose). Glycation occurs when glucose, the main sugar we use as energy, binds to deoxyribonucleic acid (DNA), proteins, and lipids leaving them unable to function properly. In skin, this reaction creates new remnants of cross-linked AGEs in the extracellular matrix of the dermis (Figure 1), a number of these AGEs have characteristic autofluorescent properties3, which the authors detected in their study using the AGE reader™ (Diagnoptics Technologies B.V., Netherlands). In this case, glycation and the formation of AGEs takes place
through the Maillard reaction, which is electrophilic carbonyl groups or reactive sugars binding to lysine or arginine (amino acids)4. The level of AGEs in long-lived tissues (not in blood) serves as a memory of glycometabolic and oxidative stress.

Skin and metabolic syndrome and AGEs

Metabolic syndrome’s (MS) main characteristics are central type obesity, glucose intolerance, dislipidemia, and arterial hypertension. Around one-third of the population are estimated to be suffering from this disease6,7. Various dermatological diseases are associated with MS and/or its components. Also, ageing is accelerated, at least in part, by MS. Metabolic syndrome causes cardiovascular, renal, and other tissue damage contributing to pathological premature ageing8. 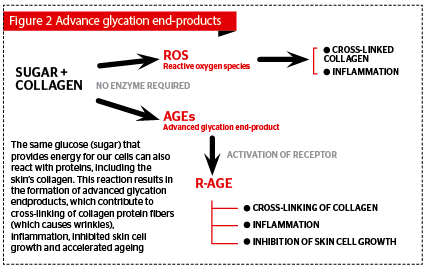 Due to the effects of metabolic syndrome in the body, including the skin, there is evidence of chronic latent inflammation caused by oxidative stress (OS), a condition in which the net amount of ROS exceeds the antioxidant capacity of the body, resulting in the release of inflammatory cytokines and sustained inflammatory protective reaction in the skin8.

Excessive ROS can lead to lipid peroxidation, protein and DNA oxidative damage; while OS affects collagen biosynthesis and increases inflammation that results in:

In the skin, glycation and the accumulation of AGEs, activate proinflammatory processes, premature cell apoptosis, oxidative damage, and even precancerous skin lesions, such as actinic keratosis, inducing mutagenesis. Microscopically, it can be recognized by  the appearance of fine wrinkles, loss of elasticity, reduced epidermal and dermal thickness, decreased mitotic rate of basal keratinocytes, and decreased proliferative capacity, and cellular senescence (Figure 1).

As the following study demonstrates, AGEs are associated with a greater expression of the signs of ageing (permanent elastic creases, seborrheic and actinic keratosis, telangiectasia), a higher cholesterol level, and serious skin dermatosis. Therefore, treatment is vitally important.

The authors compiled a table of anti-AGE ingredients, and their mechanism of action, which can be used to prevent or treat the accumulation of AGEs (Table 1).

Food containing a high glycemic index promotes the accumulation of AGEs in the body, which contributes not only to the ageing process, but is also a very serious factor in the development of chronic diseases, especially diabetes, cardiovascular, and even oncological diseases. Therefore, it is important to restrict carbohydrate consumption and look to foods with a low glycemic index, for example, cashew nuts, apples, oranges, and brown rice.

In this prospective study, the authors analyzed a group of male and female patients with, and without, metabolic syndrome (total n=145). The inclusion criteria for MS, according to the International Diabetes Federation (IDF), are central obesity (defined as waist circumference with ethnicity specific values) plus any one of the following four factors:

The AGE Reader™ (DiagnOptics B.V., Groningen, The Netherlands), a non-invasive evaluation device, was used to measure tissue accumulation of AGEs in the skin of the forearm by means of skin auto-fluorescence (skin AF).

Currently, there is still no data regarding the correlation of oxidative parameters and clinical dermatosis using AGEs analysis in this skin, the authors’ publication will reveal those that they have witnessed.

All results were calculated using SPSS-22 (IBM, USA); descriptive statistics, with normal distribution (p >0.05) (Figure 3–7). Initially, in order to explore whether there is a correlation between quantitative and dichotomous data (0=no, 1=yes) a bi-serial correlation was calculated14.

The Kolmogorov–Smirnov test determines whether the data conforms to the 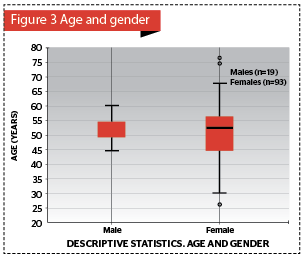 ormal distribution. The authors’ used it with 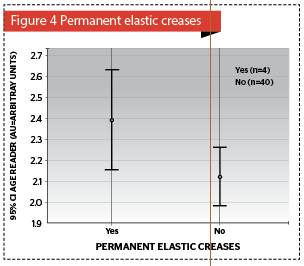 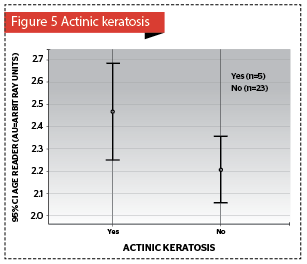 Lillieforce correction. If p>0.05, the data conforms to the normal distribution and is necessary to calculate the mean and standard deviation, as well as construct error bar graphics. But, if p≤0.05, then the median and quartile must be calculated and constructed in a box 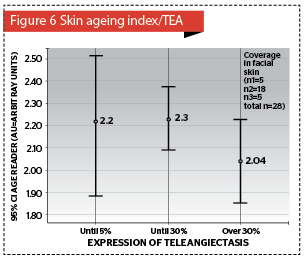 plot graphic. As not all the data involved in the Kolmogorov–Smirnov data analysis test conforms to the normal distribution (p>0.05), parametric and non-parametric statistics were used for descriptor statistics and graphical data representation.

Quantitative data, by dividing the groups according to the dichotomous data, where the bi-serial correlation was statistically significant, the mean and standard deviation could be calculated and results displayed in  Error bar graphs.

The authors calculated mean and standard deviation of age, split by gender and displayed in Figure 3.

The authors calculated the Pearson correlation between the Age Reader™ and HDL, which was statistically significant and displayed in a scatterplot graph in Figure 714,15,. 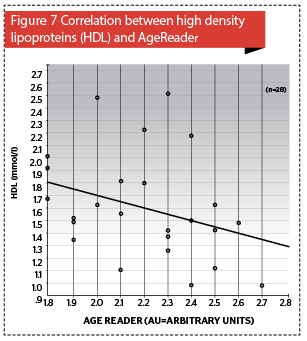 of age and gender by Kolmogorov-Smirnov test, the female patients’ ages didn’t conform to the normal distribution (p=0.002), so non-parametric statistics were used for the box plot graphic (Figure 3).

AGEs were determined in 28 patients with no statistically significant difference between the MS and no MS patients (independent samples t-test, p=0.577), but increased AGEs accumulation in the skin strongly correlated with an elevated cholesterol level (p<0.05), where AGEs mean value was 2.2 ± 0.3 AU (arbitrary units) (Figure 7).

There is no separate data for all 106 patients so number of subjects (patients) in text will be shown separately.

Vitamin D and TNF-α in the analysis of data by Kolmogorov–Smirnov test didn’t conform to the normal distribution (p<0.05), so the authors’ used non-parametric statistics and reflecting them in Table 2. These parameters have no statistically significant difference in the MS and non-MS patient groups (vitamin D, Mann–Whitney test, p=0.051 and TN-α, Mann–Whitney test, p=0.085). The same situation was found to be true with CRP.

Research into ageing has been very intensive over the past few years, AGEs especially have received particular attention on this topic.

Ageing is the progressive accumulation of damage to an organism over time leading to disease and death5. The authors’ analysed patients had a wide spectrum of skin diseases, such as seborrheic keratosis, actinic keratosis, acanthosis nigricans, acne rosacea, and tinea cruris. Manifestation of these diseases can be fairly severe, as these patients also have increased inflammatory data, oxidative stress parameters, and accumulation of AGEs.

Skin, due to its easy accessibility, offers an excellent opportunity for minimal invasive or even non-invasive investigation of glycation, taking advantage of the characteristic autofluorescent properties of AGEs. Accumulation of AGEs in the skin has therefore been thoroughly studied and is detected not only in diabetes, as expected, but also during chronological ageing5. The AGE reader™ is an objective method for skin ageing measurement, it shows a positive correlation between AGEs accumulation and patients’ chronological ageing16-18. The authors used this method to detect AGEs in their patients, and in their study, as well, demonstrated a correlation between AGEs in the skin and an increased expression of clinical ageing related changes.

ing to the inflammatory theory of ageing, a common characteristic of skin ageing factors is their ability to induce or maintain pro-inflammatory changes and trigger a local inflammatory response, which through subsequent immune responses, matrix metalloproteinase (MMP) activation and pro-inflammatory cytokine production, contributes to the structural changes observed in aged skin1. The authors’ study also shows this link, patients with higher AGEs accumulation in the skin had increased CRP and oxidative stress parameters.  Chronic inflammation due to oxidative stress in patients with MS may impact skin biological functions as well19.

A correlation had previously been identified between cholesterol and metabolic syndrome, but not with AGEs21. Therefore, the authors are the first to find this correlation, as well as the correlation between AGEs and acanthosis nigricans and teleangiectasis.

So as ageing is a complex and multifactorial process, it’s necessary to continue research to understand and find out how to impact or slow down chronological ageing.

The most typical pathological visual features in patients with MS were dyspigmentations and telangiectasia. According to Wang et al., this is a marker of the involvement of blood vessels and melanocytes22.

Although the basic functions of skin have been well documented, the role of skin in systemic metabolic disorders is far from clear. Therefore, further studies are required for a deeper understanding of early manifestation of MS in the skin, as well as, its impact on skin biological and aesthetic function.

The study shows that:

The most frequent dermatosis that correlated with elevated AGEs (p<0,05) using skin autofluorescence, was acanthosis nigricans, especially in patients with diagnosed metabolic syndrome

Skin plays a major role in the metabolism and elimination of ROS, MS is a factor of excess of ROS and reduced anti-oxidant activity 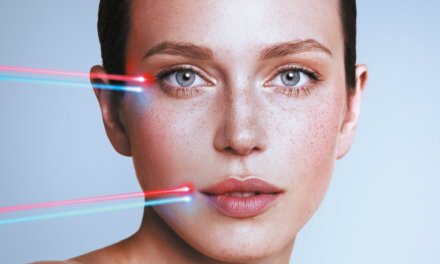 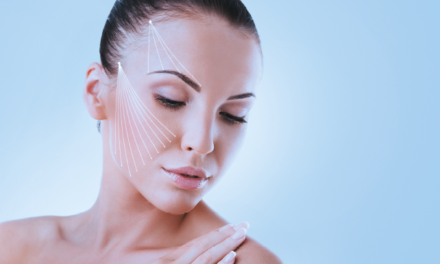 The Art of Threads A Comprehensive Review