D-Glow: for the face, neck and décolleté

The ability to be effective has always been attributed to invasive treatments; whereas, the trend in demand is increasingly geared towards non-invasive but effective treatments. The equipment that proves to be effective without invasiveness represents the revolution in mindset and a valuable tool to meet the demands of the market.

In the culture of ‘everything all at once and with no price tags’, market research shows that the trend in cosmetic consumers is towards non-invasive but effective treatments. The new generation of beauty treatment users require immediate results, often on a number of blemishes all at once with long-lasting, painless, no after-effects, and without any complications. The operator who is able to achieve this goal quickly gains fame and success and is free from the strain of managing side‑effects.

D-Glow represents the instrument to satisfy these needs thanks to its innovative technology, where extremely high performance and quality join safety and effectiveness.

D-Glow, winner of the Anti-ageing and Beauty Trophy 2013 as ‘Best Aesthetic Device for Skin Enhancement’, is not just another device among the great number of existing ones but rather ‘the device’ for the new generation of consumers.

What makes the D-Glow device so special?

With D-Glow, immediate, effective,  and painless results are achieved. With no downtime or side effects, it can be applied on any phototype, and is suitable for any skin type, at any age, in any season.

D-Glow is the combination of two technologies:

This new way of releasing RF energy allows penetration into the epidermis and dermis to be controlled, giving rise to the revolutionary sub-ablative action on the epidermis effect. 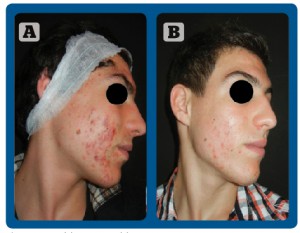 Before D-Glow, RF equipment were divided into ‘non-ablative’ and ‘ablative’.

D-Glow introduces the sub-ablative concept and effect — the ability to have an effect on the epidermis without causing bloody areas.

Controlled hyperthermia, obtained by inserting biological micro-currents on the RF carrier, is conducive to selective removal of skin layers without producing bloody areas and maintaining the effects of non-ablative RF on the dermis (contraction of the present collagen fibres and stimulation of fibroblasts produce new collagen fibres).

Widely documented in literature, RF has a regularisation effect on the secretion of sebaceous glands. The RF combination expressed as biological micro-currents, boosts the effectiveness of RF on sebum-normalisation, reactivating the glands in asphyctic skin and rebalancing seborrhoeic and impure skin. 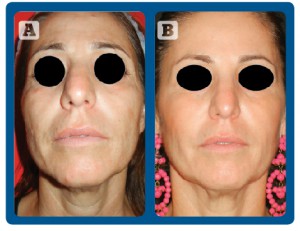 The US produces its effect through two action mechanisms — mechanical and thermal effect. The mechanical effect, via push-pull stimulation on molecules, brings about pressure variations that are conducive to moving liquids. The thermal effect is brought about by converting the energy absorbed by the tissues into heat, with an increase in cellular metabolism and vasodilation. The combination of mechanical and thermal effects brings about a biochemical effect with a transfer of dead cells and sebum to the upper layer of the epidermis, promoting  vasodilation, an increase in membrane permeability, oxygen supply, stimulation of collagen fibre production, and lymphatic drainage.

D-Glow has two handpieces. The MBC handpiece is pen-shaped and is supplied with two interchangeable heads, a blue and a red one, with a metal loop at the end. The diameter of the loop wire is 0.5 mm for the red head and 0.35 mm for the blue loop respectively, the loop length for both is 1 cm. The US handpiece is an ergonomic spatula with a triangle-shaped end blade.

The D-Glow system, in a compact shape and size, is easily packaged and transported and extremely easy to use.

D-Glow has a number of indications for use, assuring effective, immediate, and painless results with no downtime or side effects.

Treatments are performed quickly with an average duration of approximately 20 minutes.

Results are appreciable within a few hours from the first session and become more clearly noticeable the next day with an immediate improvement in acne scars, skin texture and uneven colour, elimination of blackheads, shrinking of dilated pores, and an improvement of wrinkles of the forehead, cheeks, eye contour, lip contour, and neck and décolleté.

In the following weeks the sebum-normalisation effect becomes appreciable, with a decrease in sebum secretion in problem skin and a rebalancing of asphyctic skin as well as a firming effect.

Side effects consisted of slight erythema, lasting for a few hours.

Winner of the Anti-ageing and Beauty Trophy 2013 as ‘Best Aesthetic Device for Skin Enhancement’, the D-Glow results were assessed and tested by Dr Christian Deperdu, aesthetic practitioner, Beausoleil (France), through Antera 3D® (Miravex Limited, Dublin), an imaging device that allows a surface analysis of the skin, pigmentation and vasculature. Antera 3D® makes it possible to achieve objective and quantifiable parameters, both pre- and post- treatment.

By proving that effective results can be obtained without invasiveness, D-Glow revolutionises the traditional mindset by which only invasive treatments are actually effective, thus fully meeting the increasingly marked preference by cosmetic consumers for effective, immediate, non-invasive treatments with no possible side effects.