Allergan plc, a global biopharmaceutical company, announced that VISTABEL® has received a Positive Opinion from the Agence Nationale de Sécurité du Médicament et des Produits de Santé (ANSM) for the temporary improvement in the appearance of moderate to severe forehead lines in adults when the severity of the facial lines has an important psychological impact.[ii] This is an important step towards securing national licences in the 28 countries of the European Union as well as Norway and Iceland.

This positive opinion, which follows the recent approval by the U.S. Food and Drug Administration (FDA) for BOTOXâ Cosmetic as a treatment for forehead lines, means that VISTABEL® is indicated for the temporary improvement in the appearance of moderate to severe forehead lines and/or glabellar (frown) lines and/or crow’s feet lines in adult patients when the severity of upper facial lines has an important psychological impact in adult patients.[iii],[iv] This Positive Opinion is specific to Allergan’s botulinum toxin type A product and is based on Allergan’s international phase III studies in forehead and glabellar lines treated simultaneously.[ii]

“Allergan is proud to continue its leadership in medical aesthetics and this additional indication for VISTABEL® broadens the options available to practitioners when treating forehead lines. The appearance of horizontal lines caused by muscle contraction, especially on the forehead, can have a considerable impact on patients. Once licensed, Allergan will be able to train physicians effectively to improve the appearance of upper facial lines that worry their patients,” said Marc Princen, Executive Vice President and President, International Business at Allergan.

The recommended doses are based on clinical evidence[iii],[v] and all three areas were treated with VISTABEL 64U and evaluated simultaneously in one of Phase III studies, the severity of all three areas (GL, FHL, LCL) at maximum contraction was significantly reduced compared to placebo. Patients treated with VISTABEL 64U, saw statistically significant differences compared to placebo at their first post-treatment visits (week 1) and these remained significant through Day 120 of treatment cycle 1 (p≤0.0001).[vi] For a single administration of VISTABEL®, when treating all three facial areas simultaneously (forehead lines, glabellar lines and crow’s feet lines), the total dose is 64 units comprised of 20 units for forehead lines, 20 units for glabellar and 24 units for crow’s feet lines; these doses were shown to be statistically superior to placebo.[iii]

“VISTABEL® is a well established and trusted product that has been used widely in current practice for many years. The Positive Opinion of VISTABEL® for use in moderate to severe forehead lines is good news as it means dosing guidance will now be available for trained physicians prescribing and administering the treatment in the forehead. Correct dosing helps with optimum treatment duration and patient satisfaction,” said Dr. Koenradd De Boulle, Dermatologist at Aalst Dermatology Clinic in Belgium.

Patients treated with VISTABEL®reported improvements in how bothered they were by their forehead lines, looking older than their actual age and attractiveness compared to placebo at 30 days following treatment.[vii] Of patients treated with botulinum toxin type A for forehead, glabellar and crow’s feet lines, 68.8% who previously rated themselves as looking their current age or older, believed they looked younger up to six months after treatment at day 30 (p<0.0001)[vii] In the same study, 83% of patients believed they looked more attractive up to six months after treatment (p≤0.0073) compared to placebo.[vii]

In these studies, Allergan’s botulinum toxin type A product was generally well tolerated. Like all medicines, Allergan’s botulinum toxin type A product may cause side effects although in general, adverse reactions occurred within the first few days following injection and were mild or moderate in severity and temporary.[viii] Please refer to the VISTABEL® Summary of Product Characteristics for full list of side effects. 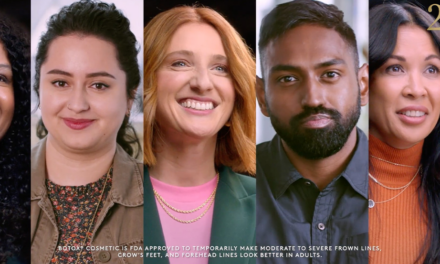 How blood can be rejuvenated