Either side of the Atlantic, augmentation of the breast remains the leading cosmetic surgery procedure. In spite of the unfavourable press about one section of the market, UK procedures rose by 6.2% and US procedures by 4% in 2011, according to recently released figures.

As to cosmetic surgery overall, procedure volumes were up by 5.8% in the UK and 2% in the US in 2011. US figures for minimally-invasive procedures and reconstructive plastic surgery grew faster than average.

With regard to breast augmentation, the US market has not been directly affected by the ongoing controversy over the defective silicone breast implants manufactured by Poly Implant Prothèse (PIP), according to the American Society of Plastic Surgeons (ASPS).

The society’s president, Malcolm Roth, tells PRIME: ‘To the best of our knowledge, PIP silicone gel-filled implants were never approved for use in the United States.’ This means that any affected American woman would have had to have been implanted outside the US in order to have received the implants that are now the subject of international concern.

The original fear was that the wider industry would have felt negative repercussions of the fraud committed by the PIP company, in terms of general patient worries over procedure safety and loss of confidence in implants across the board. However, this has not been seen, and 2011 saw 307,000 breast augmentation procedures in the US. Dr Roth says: ‘ The increasing demand for breast augmentation surgery demonstrates the high degree of satisfaction for women who have chosen to have it.’

Rising demand is also evident in the UK, a much smaller market than the US, but nonetheless indicative of trends. British Association of Aesthetic Plastic Surgeons (BAAPS) members carried out just over 10,000 breast implantations for augmentation, almost 600 more than in 2010 (Table 1).

The Association’s president-elect, Rajiv Grover, tells PRIME that procedures for the most noticeable areas of the body, such as breast augmentation, continued to prove popular as patients look to get the most impact from any surgery, to enhance their mental wellbeing and confidence in themselves.

They also need confidence in the system, however, and Dr Grover acknowledges the potential worries that the public experiences. ‘ Trust is the biggest barrier; there is no lack of desire among the public. People are frightened, as they don’t want it to go wrong.’

He acknowledges that the PIP episode, involving ostensibly genuinely CE‑marked products, has knocked confidence. ‘Customers need high standards. They feel they have been let down on all levels: by the company, by the CE-marking body, and by the clinics. This does not engender confidence.’ 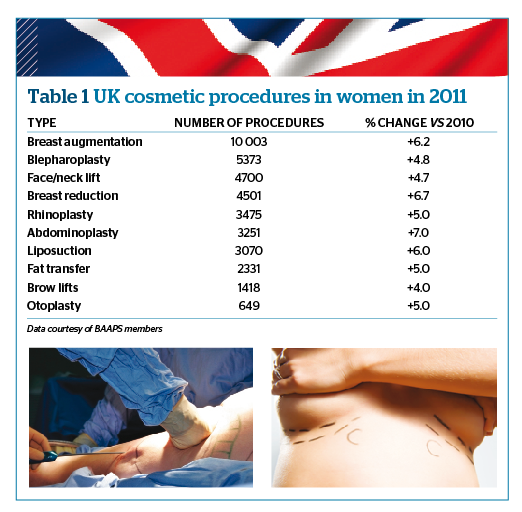 Part of rebuilding trust is acting quickly and decisively. Dr Grover observes that UK Prime Minister David Cameron and Health Secretary Andrew Lansley, eager for the NHS to set a gold standard, say that women who have been treated in a UK clinic must at least be offered a medical consultation, and facilities if required. If their symptoms are related to rupture, the clinics must offer removal if the patient so wishes. Clinics that are financially unable to offer this would have to offer the service at cost price.

Dr Grover believes that the PIP episode, involving 40,000 women in the UK alone, may take a while to unwind fully. It will certainly be a main talking point during his 2-year BAAPS presidency, which starts in September 2012. By way of comparison, the 200 BAAPS members treated an aggregate of 10,000 patients in 2011; by this reckoning they would need four times as long to address the PIP problem if all women presented.