Treatment for vitiligo: a natural choice

Vitiligo, a common pigmentary skin disorder, can be characterised by the appearance of spots or areas of depigmentation, or by the absence of the dendrite melanocytes in the basal area of the epidermis. Current therapies require the application of a topical steroid, which has been known to damage the liver and shrink the skin.

With this in mind, Dr Mostafa Omar, President of PhytoCeuticals, had a vision and began to research ancient remedies to find a natural alternative to heal the skin. Dr Omar discovered a safe remedy, derived from plants, without sacrificing the effectiveness in treating depigmentation. Dr Omar created his formula for PHYTO-C’s Vitivera lotion, which not only stimulates the synthesis of melanocytes and restores pigment in the skin, but also enhances the immune system, leaving the skin much healthier as a result.

The exact cause for vitiligo has yet to be understood in its entirety. It can, however, be linked to stress, exposure to harsh chemicals, viral influences, or caused by autoimmune disorders. There are also different types of vitiligo: non-segmental and segmental. Up to 90% of people suffering with this skin disorder have non-segmental vitiligo, which generally appears equally on both sides of the body. Spots can be seen on areas of the body such as the backs of hands, feet, eyes, arms, elbows, knees, and the mouth. Within non-segmental vitiligo, there are further sub-categories: 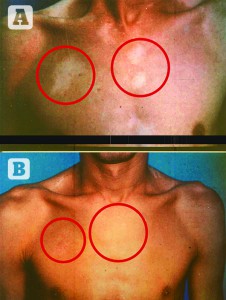 Figure 1 32-year-old male patient who had suffered from vitiligo for 10 years. (A) Before and (B) after 1 year of treatment

In contrast, segmental vitiligo spreads rapidly and is constant. However, it generally responds well to topical treatment. Approximately 10% of people diagnosed with vitiligo have this strain. Segmental vitiligo is asymmetrical and tends to appear at the dorsal roots of the spine.

After applying PHYTO-C’s Vitivera lotion, patients are told to expose the skin to sunlight for 10–15 minutes once daily. 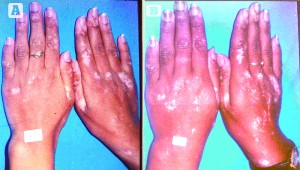 Figure 2 18-year-old female patient who had suffered from vitiligo for 3 years. (A) Before and (B) results after 2 weeks of treatment 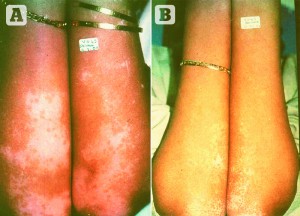 Figure 3
18-year-old female patient who had suffered from vitiligo for 3 years. (A) Before and (B)
results after 3 months of treatment 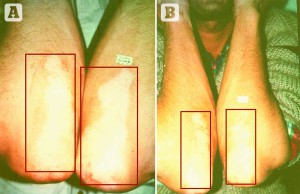 Figure 4
34-year-old male patient who had
suffered from vitiligo for 6 years. (A) Before and (B)results after 3 months of treatment