Background and Objective
Post-inflammatory hyperpigmentation (PIH) is one of the most common adverse effects related to dermatologic procedures, especially those for cosmetic purposes. Low fluence Q-Switched Nd:YAG laser (LFQS) has been widely used for this condition in the field but little has been published on it.

Research design and methods
Patients with PIH after cosmetic procedures were enrolled in the study. Patients were treated with LFQS at an interval of 2 to 3 weeks, and photographs were taken. Objective measurement includes erythema and melanin index on the same spot. Two blinded assessors graded the degree of improvement using photographs, based on a quartile scale (0-3). Patients’ satisfaction was also reported after treatment.

Results
A total of 45 patients were included in the analysis. Patients received 10 treatment sessions. Patients who started LFQS treatment within 3 months of the causable event showed better clinical outcome. Those who had higher erythema index before treatment tend to respond less to the treatment.

Conclusion
LFQS can be a good treatment modality for PIH after dermatologic procedures. Earlier treatment can provide rapid resolution and better results. However, for patients with PIH combined with intense erythema, LFQS may not be the first consideration in the clinical field.

Dermatologic procedures, especially for cosmetic purposes, always carry a risk for developing post‑inflammatory hyperpigmentation (PIH). PIH usually takes a long time to dissipate and treatment is difficult and time consuming1-3. It often takes many months and sometimes years to achieve desirable results even with proper management. The first steps to prevent possible PIH include selecting those patients at higher risk, proper pre-treatment before dermatologic procedures, and vigorous sun avoidance and photoprotection4.

The single most likely cause for PIH is not yet clear. Direct stimulation of melanocytes by inflammatory mediators, reactive oxygen species produced from injured skin or inflammatory cells, and endocrine changes provoked by epidermal cell damage can be listed as the most plausible causes5.

Recently, the 1064 nm Q-Switched Nd:YAG laser with low fluence has been widely used in melasma with a good degree of success6–8. Low fluence 1064 nm Q-switched Nd:YAG laser (LFQS) has been proved to cause inactivation of melanocytes in the subcellular level without any massive destruction of melanocytes or pigment-containing cells9. Therefore, it does not initiate severe inflammation in the skin unlike other laser surgery, but repetitive exposure of LFQS facilitates improvement of pigmentation. Kim et al10 reported five cases of PIH patients successfully treated with this modality. They emphasised its clinical benefit, especially in patients with PIH after other laser surgery or procedures. However, no further studies have yet been published.

In this study, the authors evaluated the clinical benefit and limitation of LFQS for the management of PIH after dermatologic procedures for cosmetic purposes.

Patients who received LFQS for PIH after dermatologic procedures and completed 10 treatment sessions at 2–3 week intervals were included in the analysis. Retrospective chart reviews were conducted on these eligible patients under the approval of an institutional review board. Patients who started LFQS treatment within 3 months of the insult causing PIH were placed in group A and all others were placed in group B.

All patients were treated with LFQS (MedLite C4, Hoya ConBio, Fremont, CA) every 2 to 3 weeks. Several passes (mean 3–4 passes) of LFQS were applied on PIH sites (6 mm spot size, using energy fluence ranging from 1.0–1.5 J/cm2 at 10 Hz). Slight erythema without any petechia on the perilesional area was taken as the sign to stop laser passes. Immediately after treatment, a cool mask was applied on the treated area for approximately 20 minutes. Patients were instructed to use moisturiser containing tranexamic acid and broad spectrum sunscreen.

Figure 1 The best responder to LFQS. Patient was 37 years old and acquired PIH after fractional laser treatment, which had been performed 4 weeks before her visit. She showed an excellent clinical result after LFQS treatment. (A) Before treatment, (B) 2 weeks after fifth LFQS treatment, (C) 1 month after tenth session

Before each treatment session, digital photographic documentation was obtained under the same light source, room, and camera. Melanin index (MI) and erythema index (EI) was measured on the same spots (on the most severe PIH spot and on the inner aspect of the upper arm) using a skin colour measuring device (Mexameter, MX18, Courage & Khazaka, Electronic GmbH, Cologne, Germany). The difference in MI and EI between the most severe PIH spot and inner aspect of upper arm is defined as delta (Δ) MI and Δ EI.

Two blinded assessors graded the degree of improvement using photographs based on a quartile scale (0–3; 0 = worse or less than 25% improvement, 1 = 25–50%, 2 = 51–75%, and 3 = 76–100% improvement). Adverse events were also documented, such as persistent erythema, oedema, pigmentary changes, and scarring. Patient satisfaction was also reported.

To compare the treatment response between group A and group B, statistical analysis was carried out (SPSS, Version 19.0, SPSS inc., Chicago, IL). Correlation coefficients were determined by Pearson’s rank correlation test. All tests were assessed at an α=0.05 significant level. P<0.05 is considered to be statistically significant. Values were documented as means ±  standard deviations. 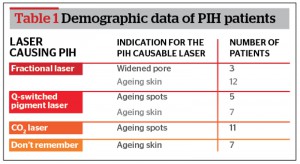 A total of 45 patients (age: 43.1 ± 8.9 years, M:F = 4:41) were included in the analysis. Twenty-two of them were classified as group A and the rest of them as group B. Fifteen patients developed PIH after fractional laser treatment. Q-switched pigment laser, including intense pulsed light, caused PIH in 12 patients and CO2 laser in 11 patients. Seven patients did not remember the procedure that they had received (Table 1).

Δ EI and Δ MI were calculated because the difference of erythema and pigmentation in the PIH area compared to the inner aspect of the upper arm, which reflects constitutional skin colour, can be a better indicator to the degree of PIH. Δ MI and Δ EI failed to show statistical differences between the two groups. However, the degree of improvement assessed by two blinded dermatologists was evaluated higher in patients who were treated with LFQS earlier (Table 2, Figure 1).

Patients who showed higher Δ EI before treatment tend to respond less to treatment (correlation factor (r) = -0.348, p<0.05). However, initial Δ MI did not show any correlation to the clinical outcome (Figure 2).

No patients reported any adverse effect during or after LFQS. Forty patients were satisfied or very satisfied with the treatment and five patients who were enrolled in group B reported only slight improvement. 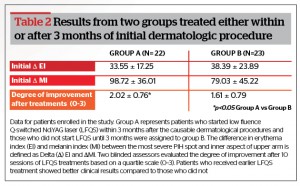 Currently, many patients receive dermatologic procedures for various cosmetic purposes. In accordance with the increased number of treatments, unwanted adverse effects may follow. Any kind of laser surgery or dermatologic procedure can cause subclinical wounds, inflammation in the skin, and increase the risk of developing PIH, which is a significant issue especially in Asian patients2,11.

The prevention and treatment of PIH should begin with the management of any initial inflammatory condition. Predicting the events that will occur next in the skin is the first and most important step in preventing PIH. First-line therapy is topical depigmenting agent in addition to photoprotection, including sunscreens12. Topical therapy is proven to be effective for epidermal PIH but it takes time to observe the noticeable differences and certain clinical conditions of PIH do not respond at all to topical therapy, such as long standing PIH or PIH with robust dermal melanophages3,4. In that case, laser therapy or peelings may help treat recalcitrant hyperpigmentation13.

Since 2008, Q-Switched Nd:YAG lasers have been successfully applied to various pigmentary conditions, including melasma and even Nevus of Ota, with much lower fluence than conventional uses (more than 7 J/cm2). The use of LFQS in the clinical field prevails especially in Asian countries. However, only one report on clinical application of LFQS in PIH has been published before10. 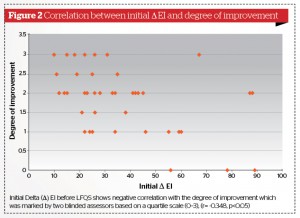 In the authors’ study, all patients showed clinical improvement after ten sessions of LFQS treatment without any serious adverse effect. Patients who started treatment earlier — within 3 months of the initial insult causing PIH — experienced a more encouraging clinical outcome, although initial Δ EI and Δ MI did not show statistical difference between the two groups. Patients who had more erythema in PIH lesions did not respond well, reflecting that the control of inflammation would be the first step in treating these patients. The authors proved in another study that melasma patients with intense erythema before treatment showed less response to LFQS, which is consistent with this result14.

This is a retrospective study of a case series. Therefore, the control could not be provided to compare the treatment effect side-by-side. However, ten treatment sessions of LFQS yielded satisfactory results in patients. Further split-face studies should be warranted to clarify its clinical outcome. Another limitation of this retrospective study is that the authors could not measure EI and MI on every patient at each visit. However, initial EI and MI is always checked on every patient in the authors’ clinic, which enables the analysis of relationship between initial Δ EI and the treatment outcome which was evaluated by before and after photo-grading by two blinded assessors.

PIH is expected to subside in time but patients do not tolerate it in general. Active management of PIH is a must to ensure patients’ satisfaction in the daily practice. This study suggests that LFQS can be a good treatment modality for this condition.

It should be kept in mind that LFQS can cause mottled hypopigmentation owing to repetitive exposure of laser on the skin15,16. The authors have used LFQS for almost 5 years but have not experienced any single case of mottled hypopigmetation after LFQS so far. Under this treatment setting (much lower fluence than other reports using LFQS, a treatment interval of 2 to 3 weeks and forceful regular uses of topical moisturiser), the risk of developing hypopigmentation appeared to be low, although cautions should be taken at every instance when using LFQS repetitively on patients.