This was a prospective consecutive study of the efficacy of FCT on horizontal dynamic forehead wrinkles performed by a single physician. Informed consent was obtained from each patient before all procedures.

Eligible subjects were men and women aged 20–65 years with flat or concave temples and moderate-to-severe dynamic wrinkles in the forehead (at maximum raise of eyebrows), as assessed using the Facial Wrinkle Scale (FWS) (Table 1). Exclusion criteria included any medical conditions that might have put the patient at risk with exposure to cold (e.g. cryoglobulinaemia, paroxysmal cold haemoglobinuria, cold urticaria, and Raynaud’s disease). Patients with open or infected wounds and existing neuromuscular disease were also excluded.

The iovera device was used to apply FCT to the temporal branches of the facial nerve. This handheld device delivers compressed liquid nitrous oxide to a close-ended 27 gauge, 6.9 mm long three-needle probe.

After marking and anaesthetising the area with subcutaneous injections of 2% lidocaine (without adrenaline), eligible patients were placed in a supine position for treatment. The aforementioned probe, connected to the iovera device, was inserted into the temple region where FCT was delivered and a cold zone was formed around the temporal branches of the facial nerve. Each treatment consisted of four to six FCT cycles (one cycle per probe insertion) in each temple.

Severity of dynamic wrinkles was assessed using the FWS, before and after the treatment, by the physician. Subjects assessed the change in dynamic wrinkle severity on a 9-point scale and rated their degree of satisfaction with the treatment on a 7-point scale (Table 1). Scores of more than +2 points on the improvement scale were considered to be an improvement and scores of 6 and above on the satisfaction scale were considered to be complete satisfaction.

Adverse events (AEs) were documented based on subject-reported signs and symptoms, and physical examination performed by the investigator.

Wrinkle severity scores before and after the procedure were analysed for statistical significance using the Wilcoxon Matched-Pairs Signed-Ranks Test. 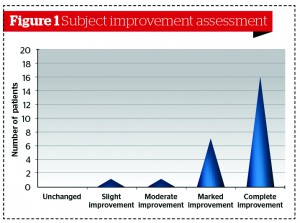