There is a significant clinical need for strategies for adequately reconstructing congenital and acquired soft tissue defects. Human adipose tissue is an ideal source of autologous cells that is both plentiful and easily obtainable in large quantities through the simple surgical procedure of liposuction. Recently, the role of adult stem cells in adipose tissue has gained much interest, owing to their potential for growing new tissue and researchers continuing to advance their applications in plastic surgery and regenerative medicine. One approach is to harvest the stromal vascular fraction (SVF) of lipoaspirated fat and enrich the lipograft in a single surgical procedure, thereby avoiding lengthy and costly in vitro culturing steps. In stromal enriched lipograft (SEL), freshly isolated SVF is attached to the aspirated fat, with the fat tissue acting as a living bio-scaffold before transplantation. Preclinical and published clinical studies show that SEL offers the possibility of finally fulfilling the key principle of replacing like for like, without the drawbacks of the old methods of lipofilling. The current applications and the future perspectives of SEL unquestionably represent innovative techniques with huge therapeutic potential that must be thoughtfully balanced against the stringent standards of scientific and clinical investigation.

Fat injection reportedly started in 1893when German physician Franz Neuber used a small piece of upper arm fat to build up the face of a patient whose cheek had a large pit caused by a tubercular inflammation of the bone1. In 1926, Dr Conrad Miller warned that ‘the end-results in free fat transplantation depend, aside from various local and general factors, on the method and technique’2. With the advent of liposuction in the 1980s, it became possible to aspirate and reinject fat, allowing transplantation of small volumes for soft tissue augmentation for the correction of contour irregularities3. Initially, it was performed by using microcannulae and small 5 cc and 10 cc syringes. Aspirated fat was then injected without previous processing4.

In the last 25 years, a range of different techniques for lipoinjection have been developed to correct a number of problems, such as buttocks (augmentation and reshaping), trochanteric depressions, breast augmentation, scar depressions, thighs and legs (calf and ankle augmentation), small wrinkles and depressions of the face (Romberg’s disease), nasolabial fold, upper–outer breast quadrant, and liposuction sequel5–9. The key to successful fat grafting lies in the technique of harvesting, refinement, and transfer of subcutaneous tissue to provide pure, intact parcels of fat that are essential for successful fat grafting10. 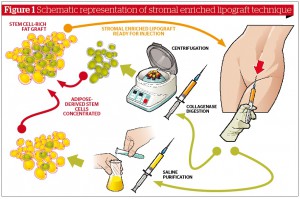 Lipoaspirate contains a large number of multipotent cells, which is an essential prerequisite for stem cell-based therapies. It has been found that stem and progenitor cells in the uncultured stromal vascular fraction (SVF) from adipose tissue usually amount to up to 3% of the whole sample11. Adipose-derived stem cells (ADSCs) can easily be isolated by tissue digestion and centrifugation steps, followed by the outgrowth of the plastic adherent fraction from the SVF12. The potential of using autologous adult stem cells derived from fat tissue is quickly becoming a clinical reality. The presence of ADSCs has clinical implications for autologous fat transfer because they may contribute to neoangiogenesis in the acute phase by acting as endothelial progenitor cells or angiogenic factor-releasing cells13. Stromal enriched lipograft (SEL), the new technique of tissue engineering using ADSCs has revolutionised aspects of reconstructive and aesthetic surgery. Stromal enriched lipograft is based on the use of ADSCs combined with a biomaterial, which is the adipose tissue that has been processed to be used as a natural scaffold, along with biomolecules, cytokines, and growth factors, which are secreted by the stem cells and the adipose tissue14.