Acne vulgaris is a common inflammatory disease of the pilosebaceous unit affecting millions of people worldwide. Its pathogenesis is multifactorial and a number of therapies are available, which include topical, systemic, chemical peels, and light-based devices. This article revisits all aspects of the disease, including relatively recent advances in pathogenesis and therapy.

Acne vulgaris is a chronic inflammatory disease of the pilosebaceous unit affecting almost all adolescents to some degree. Understanding of the underlying pathophysiology, the range of treatments and their side-effects will help the attending physician to use the most appropriate therapy. There are a number of diseases that could resemble acne vulgaris, such as gram negative folliculitis, rosacea fulminans, mechanical acne, tar acne, chloracne, and congenital adrenal hyperplasia. These will not be discussed in this article. The use of chemical peels and lasers in acne will be discussed in a future article.

The pathogenesis of acne vulgaris is multifactorial and can be considered to result from four aetiological factors1:

The disease results from interplay between these four factors.

The up-regulation of IL-1α contributes to the development of comedones independent of the colonisation with P. acnes. A relative linoleic acid deficiency has also been described. Sebaceous lipids are regulated by peroxisome proliferator-activated receptors (PPARs), which act to regulate epidermal growth and differentiation, as well as lipid metabolism. Sebocyte activity is also regulated by a number of mediators such as neuropeptidases, α-melanocyte stimulating hormone, insulin-like growth factor (IGF)-1R, corticotrophin releasing hormone (CRH)-R1, dipeptidyl peptidase-IV (DPP4), and aminopeptidase N2,3.

Treatment is directed towards one or more of these underlying causes and will be explored in greater detail in this article, as outlined in Table 1. 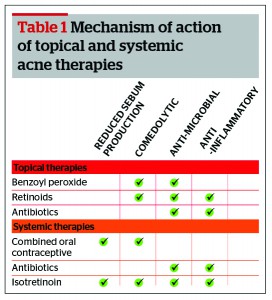 It is clear that acne is multifactorial, with both genetic and environmental factors playing their part. Recent molecular genetics studies have implicated genes involved in the innate immune response, steroid hormone metabolism and associated receptors in the pathogenesis of acne; however, our understanding of the interaction of mechanistic pathways remains incomplete. The issue of genetics has never been doubted; there is a high concordance among identical twins and a tendency towards severe acne in the presence of a positive family history. It is probable that a number of genes are involved in predisposing an individual to acne. These include the genes that encode for cytochrome P450-1A1 and steroid-21-hydroxylase. There is no conclusive evidence that acne is associated with poor hygiene, lack of exercise, sunlight, factors often cited by patients as possible causes of their acne. Some drugs can elicit acneiform eruptions, which typically lack comedones4,5.

Assessment of patients with acne should include the disease duration, subjective severity, effect on quality of life, previous treatments, duration of treatment, how topical treatments were applied (all over the face, as it should be, or just on active lesions), their effectiveness, and side-effects. Exploring patients’ expectations of therapy is an important part of the consultation. To guide treatment options, all patients should be asked about previous psychiatric morbidity, current medications being taken, and females about plans for family and current contraceptive measures being used as some treatments for acne can interfere with the aforementioned issues. Objective measurement of severity is aided by use of standardised scales, such as the Leeds Acne Grading Scale6.