With regard to evaluations of the use of PRP in androgenic alopecia, there are three main studies currently available. Sorbellini et al15 carried out an in vitro study on 50 patients. Twelve follicles were taken from each patient, of which four follicles were placed in PRP, four in Ringer’s solution, and four in a standard solution. The authors then measured mitotic activity. The results showed a significant increase of mitotic activity and a reduction in the apoptotic process in the PRP group.

The purpose of Takikawa et al’s study16 was to see whether there is a difference between simple PRP injection and PRP containing delteparine. Delteparine is a protein carrier for growth factors in PRP. The study was conducted with 26 volunteers with thin hair who received five local treatments—half with PRP plus delteparine and half with PRP alone—and evaluated for a period of 12 weeks (Figure 1). Experimental and control areas were photographed, digitally measured and biopsies taken for histology examination. Significant differences were seen in hair cross-sections, but not in hair density. The interesting point for the purposes of the present article is that PRP improved density by 16% at 12 weeks.Greco and Brandt17 found that traumatising and infusing growth factors into the scalp reversed miniaturisation over an 8-month period when compared with control. Ten hair samples were taken from each patient; five patients in the Control Group (CG) and five from the Treatment Group (TG). Hair diameter was measured using a Starrett micrometer.  In the TG , 60 cc of blood was drawn and 10 cc PRP was processed. The CG also had 60 cc of blood drawn, but this was not processed. The scalp was first traumatised in both groups with a 1 mm microneedling roller to initiate keratinocyte migration and wound healing. The TG was then injected with PRP. Normal saline was injected into the scalps of the CG in a similar fashion. Patients were evaluated and hair diameter measurements were taken using the micrometre at 4 months and 8 months post-treatment. 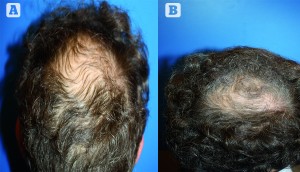 For the authors’ coming evaluation, minimal guidelines should be respected. The number of inclusion must be sufficient (more than 50), digital measurement must be proceeded with a tattoo mark (to be at exactly the same place), short cut and dyeing solution if necessary. The following parameters must also be determined: hair density, caliber and ratio (anagen : telogen). Photography must also be standardised. In the author’s study, 60 patients (male and female) were included, who all received digital measurements (tattoo mark, hair density, caliber and ratio) and had standardised photographs taken. As with the Greco and Brandt study17, 60 cc of blood was drawn and 10 cc of PRP processed using the MyCells kit. The scalp was first traumatised with a 1.5 mm microneedling roller. Patients underwent two treatment sessions at intervals of 3 months. At 3 months an increase in hair density of 18.8% was observed, as well as a decrease in the average of caliber (-2%) as the new hairs are thin (Figure 3). At 9 months, this increased to 29% for density and 5% for caliber (Figure 4).

In this type of treatment, microneedling initiates the keratinocyte migration and the growth factors improve follicle vascularisation, stimulate mitosis, promote the anagen phase, and slow apoptosis. Compliance with these guidelines will allow the authors of the present article to move forward in the validation and evaluation of the PRP process for hair growth.

The second treatment application of PRP is for improvements in male pattern baldness surgery. PRP can be used at different levels: to strengthen a poor donor area (stimulation will be at least 8–10 months before surgery), improve graft survival, and minimise the postoperative adverse effects in the donor site (reduce donor scarring) and recipient area (less inflammation).

The use of PRP in hair restoration surgery has demonstrated an increased yield when used as a graft storage medium. In this case, it is essential to activate the PRP with calcium chloride or thrombin.

When PRP is injected directly in the dermal layer, it is  traumatised and influences the production of adrenaline and calcium, which initiate the activation cascade. In this case, however, PRP is used as a storage medium, without any traumatisation, so it is necessary to ‘manually’ activate the PRP by using calcium chloride or thrombin. When bathed in activated PRP, the growth factors attach to the stem cells in the bulge area of the dissected follicular unit, thus increasing the yield of newly transplanted follicles. Uebel et al18 observed a significant difference in the yield of follicular units when comparing the experimental with the control areas of the scalp. The areas treated with platelet plasma growth factors demonstrated a yield of 18.7 follicular units per cm2, while the control areas yielded 16.4 follicular units per cm2, an increase in follicular density of 15.1%. Among patients who used the experimental protocol, some experienced only 3%, and others experienced a 52% increase in density.

Furthermore, injecting PRP into the recipient site increases vascularisation to the transplanted follicular units, thus increasing yield and the density of non-transplanted hair19, 20.