Melasma is a very common skin condition that occurs worldwide in a variety of geographical and ethnic groups, but is more commonly found in the Asian and Middle Easter population.1

Clinically, it is defined as dark-brown macules and patches that appear over sun-exposed areas on face, neck and forearms. It is mostly seen in women of reproductive age groups (30-40 years old) and is more infrequent in males and postmenopausal women, with only around 10% of cases.

Melasma is a multifactorial condition: factors that have been implicated in exacerbating or triggering melasma include sex hormones, genetic predisposition, ultraviolet (UV) light exposure, oral contraceptive pills, cosmetics, and phototoxic drugs.2 Over the years, doctors have had a simplistic vision of its pathogenesis and the treatment has been based on the use of depigmenting agents (glycolic acid, trichloroacetic acid, kojic acid, and lactic acid) and medical device lasers (Q-switched Nd:YAG laser, ruby laser, Alexandrite laser, Er:YAG laser, and Fraxel laser), and intense pulsed light (IPL).

However, research has found that targeting melanocytes and melanosomes is not enough. There are reasons to suggest the existence of a link between pigmentation and vascularization, as well as photodamage.

Vascular melasma is defined as a hyperpigmented lesion, with erythema and teleangiectasias, that shows a significant increase in vascularization: increase in the number and size of blood vessels (angiogenesis), increase in the expression of VEGF and response to topical treatment with plasmin inhibitors.

The expression of vascular endotelial growth factor (VEGF), a major angiogenic factor of the skin, has been also investigated in melasma.

USE OF TRANEXAMIC ACID IN MELASMA

Tranexamic acid (TXA) (trans-4-aminomethyl cyclohexane carboxylic acid) has been recently recommended for use in melasma. It is not a new molecule, it has been used in the treatment of menorrhagia since the 70s. The use of TXA in melasma was first reported by Nijo in 19793; it was an accidental discovery in a melasma patient who was receiving TXA for chronic urticaria.

TXA is an analogue of lysine and inhibits fibrinolysis and blocks, with high affinity, the lysine to plasminogen binding sites, thereby preventing formation of the complex between plasminogen, fibrin and tissue plasminogen activator.4

Plasmin also activates monocytes, neutrophils, and the complement pathway, leading to the development of inflammation and is not simply involved in fibrinolytic systems.

Tranexamic acid can be administered as an oral preparation, a topical preparation, or an intralesional agent. It is probably the first oral medication with proven efficacy in the treatment of melasma. 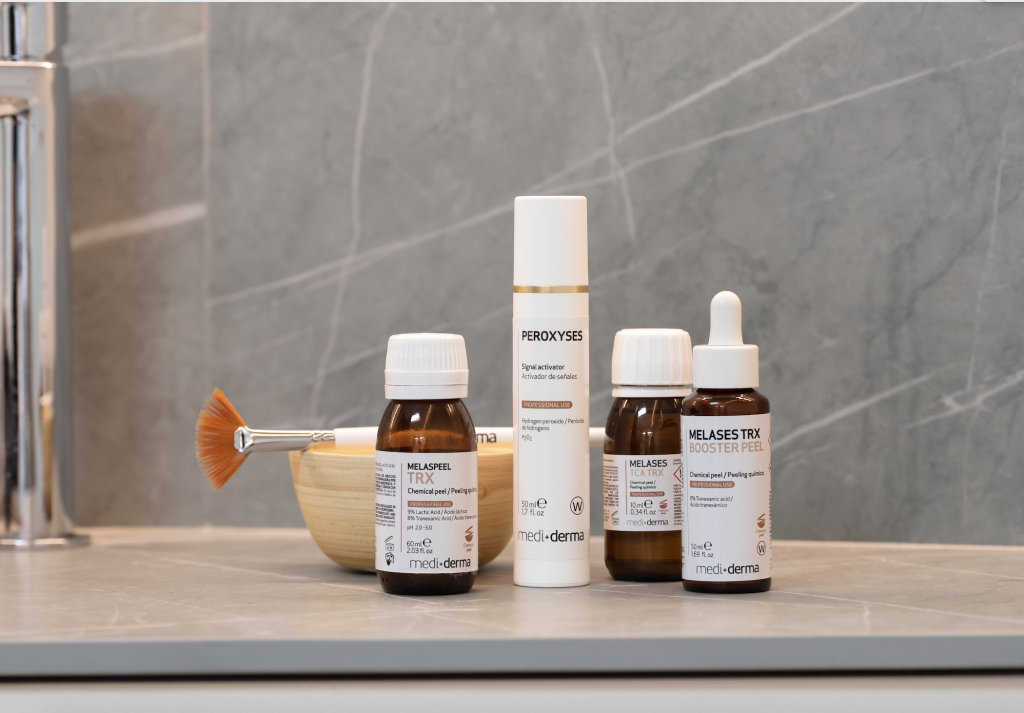 The MELASES line is one of the lines that contains this ingredient. It is a system formulated with tranexamic and tricloroacetic acid. We can even prepare the skin with PEROXYSES, formulated with hydrogen peroxide and increases the skin’s permeability. Then, we would apply MELASES TRX TCA PEEL, a peeling that combats pigmentations with melanic and vascular component due to its high content in TCA, tranexamic acid and AHA’s. To finish, MELASES TRXBOOSTER PEEL is a depigmenting booster for any treatment which also provides deep hydration. 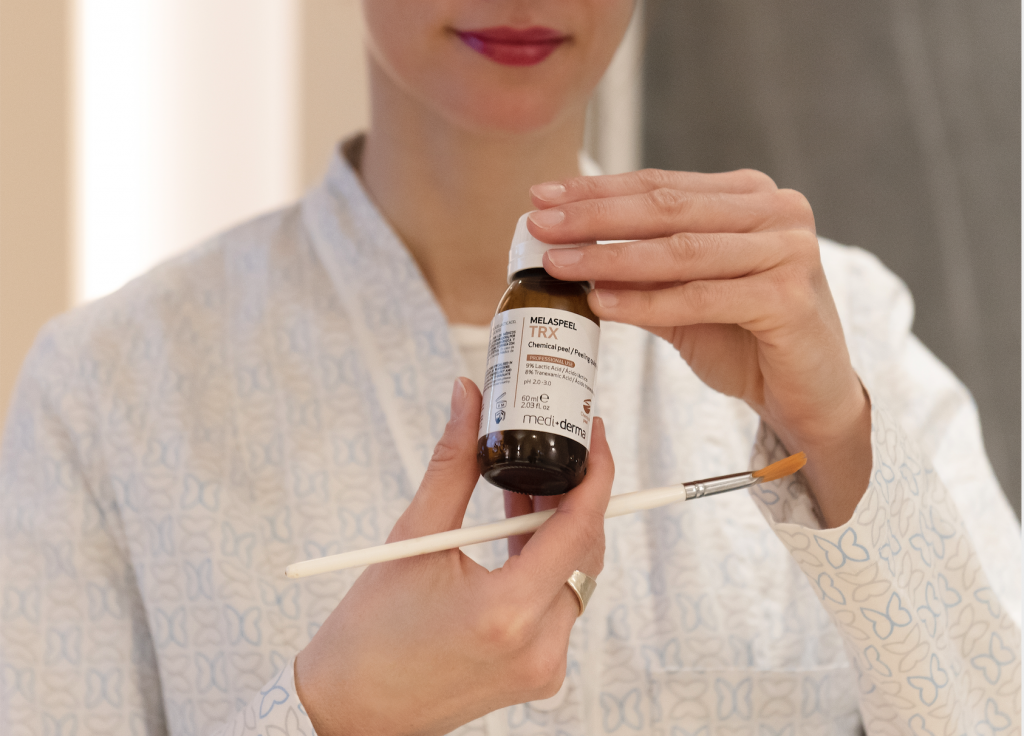 MELASPEEL TRX also one of our products with tranexamic acid, that has its origin in the modified Jessner formula. It is indicated for light-moderate hyperpigmentations with a vascular component.

Nanotechnology allows to carry active ingredients deep into the dermis. Liposomes are small spherical vesicles comprised of lipid bilayers. Sesderma® liposomes have a nano diameter, that means a diameter of 10-9 meters in size. Nanoliposomes are manufactured with GRAS (Generally Recognized As Safe) ingredients according to FDA.

Nanoliposomes are able to carry not only water-soluble molecules but also fat-soluble ones. Due to its composition based on soy phosphatidyl choline, they are rich in oleic, linoleic and linolenic acid and provide unsaturated fatty acids to the skin. This way, they restore the balance of the hydrolipidic mantle, the transepidermal water loss (TEWL) and the architecture of the stratum corneum, making the skin barrier more compact.

Thanks to the encapsulation of tranexamic acid in liposomes, this molecule can achieve its target: melanocyte and endothelial cell. This technology allows to use lower concentrations of drugs or active ingredients, reducing the toxicity but with higher levels of efficacy because the action is focused on the target.

When spots are severe, we resort to TARGET NANOPEEL since, thanks to nanotechnology and its innovative actives, we manage to act directly on the melanocyte, thus fighting the origin of spots, not only its signs.

Thanks to its epithelializing action, they repair the damaged stratum corneum, strengthening the skin barrier function. They reduce swelling in the treated area, prevent the proliferation of infections, normalize the skin surface lipid composition and thanks to the linoleic acid they help to even out the skin tone.

HOW ARE SESDERMA NANO LIPOSOMES MANUFACTURED?

On the one side, soy lecithin is dissolved in an organic solvent and a detergent is added. Separately, the molecule of interest is dissolved in purified or saline water, or in the organic solvent, depending on the nature of the molecule. Both phases are mixed at constant frequency under vacuum conditions and at a certain temperature (above the phase transition temperature). Finally, the liposomal suspension is passed through a 200nm pore size filter.

The liposomes obtained are unilamellar, stable and homogeneous. The diameter of the vesicles vary between 50 and 200nm.

Sesderma® liposomes enhance epidermal penetration and enables permeation to the deepest layers of the skin.

Skin penetration depends on the carrier used and the nature of the entrapped molecule.

Microneedling is a well-known technique performed by doctors with the aim of enhacing the epidermal regeneration, forming new collagen, levelling the distribution of melanin and repairing the dermis. 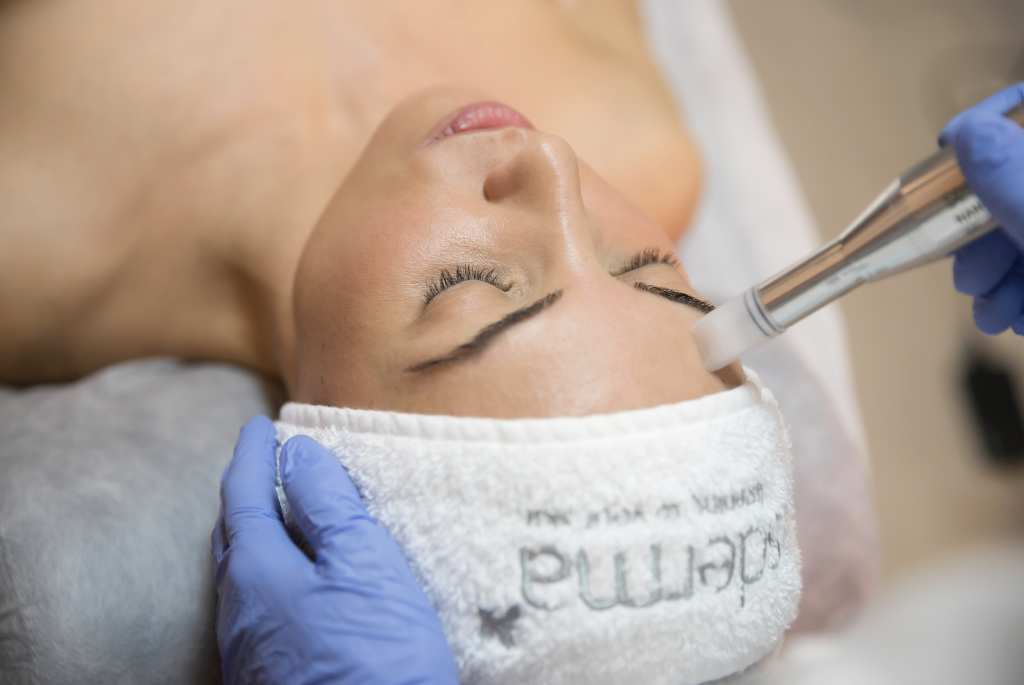 Due to the release of growth factors during the micro-injury caused to the skin and the change of the electric potential in the cell membrane, it improves the communication between keratinocytes, melanocytes and fibroblasts.

Retinol is a must in the treatment of melasma and hyperpigmentation because it is an active ingredient that controls excited melanocyte and provides an exfoliation action, due to the interaction with some nuclear and citoplasmic receptors. It can be used not only in the clinic during the procedure but in the daily routine of cosmetic products. 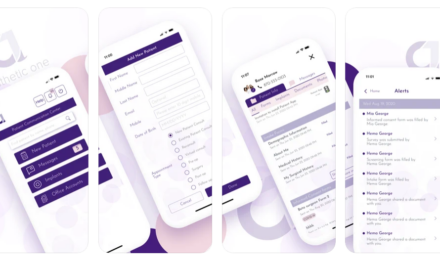 ‘Aesthetic One®’ App Developed by The Aesthetic Society Registers Over 6,000 Breast Implants 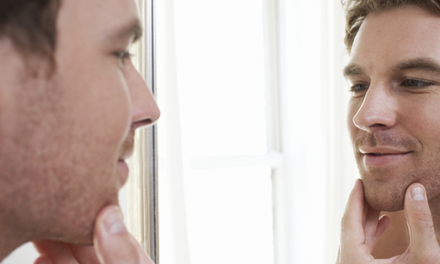