Modern aesthetic medicine offers many options for solving the problems of ageing. In recent years, interest from practitioners in minimally invasive methods of thread lifting has dramatically increased. The treads can be made of a number of  materials, having various kinds of configurations. Despite positive clinical effects, doctors and patients are still concerned about the safety of this method in a delayed time interval.

With the active application of threads, the incidence of side-effects and complications increased. Evidence-based medicine will help us to understand which methods are better to use in clinical practice with minimal risks of delayed side‑effects.

We conducted a clinical study to understand the biophysical properties of the skin of women who were implanted with minimally invasive absorbable Aptos threads, made of polylactic acid in combination with caprolactone1-3.

This study included 32 women with age-related changes aged 35–65 years. All patients were divided into 3 age groups:

Many patients were found to have had combined and oily skin with combined and morphological deformation types of ageing. All patients underwent general clinical, laboratory, and instrumental examination.

All participants underwent thread lifting for the correction of age-related changes4–7 in the middle third of the face, mental, and submental areas, using Aptos Excellence Visage, Thread 2G, Needle 2G — an absorbable material made of polylactic acid in combination with caprolactone8–10.

The following parameters were evaluated:

All parameters were evaluated at different time intervals: before thread lifting and 1, 3, 6, and 12 months after implantation in three age groups, considering skin characteristics of each patient age group.

Statistical processing of the results was carried out using classical mathematical methods of variation using the Microsoft Excel 2007 program analysis package on a personal computer. 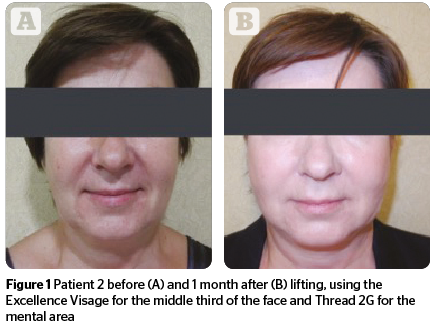 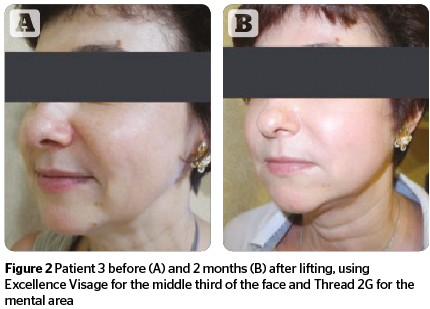 Analysis of the biophysical properties of the skin after the thread lifting using Aptos methods (threads made of polylactic acid in combination with caprolactone) showed the following results:

In all the subjects of all age groups the level of hydration increased by 10, 9, and 6 conventional units respectively. In patients aged 35–45 years, it was 1.7 times greater than in the group of patients of the late reproductive and perimenopause periods. The maximum level of hydration was noted at the third month.

Visualization and evaluation of skin structure showed reduction of the number and size of pores by an average of 1.8 times in 97% of cases in patients of active and late reproductive periods and 1.5 times in 89% of cases in women of Perimenopause period.

When assessing skin architectonics in all age groups, its improvement was noted at 10, 17 and 23%, respectively. Visual evaluation of skin structure was carried out in the periorbital and mental regions.

Thus, the analysis showed that in all patients with age-related changes of the skin after implementation of absorbable Aptos threads, the biophysical properties of the skin improved according to the age groups:

These data are confirmed by clinical results, which are recorded in photographs of patients before and after thread application of various modifications of absorbable Aptos threads. A positive result of lifting with the use of absorbable threads with multidirectional barbs preloaded in the cannula.

The desired aesthetic effect was obtained after the thread lifting, which combined the use of 2 absorbable threads made of polylactic acid in combination with caprolactone: Excellence Visage (with multidirectional barbs) in the middle third of the face and Thread 2G (thread attached to the double needles), in the mental region.

The results of the clinical study confirmed that the Aptos thread lifting method, using threads composed of polylactic acid in combination with caprolactone, is safe and highly effective. It provides improvement of skin quality and structure that lasts from 1 to 3 years, depending on the degree of age-related changes.

Lavieen an outstanding method for skin resurfacing and rejuvenation