One of the most common periocular ageing changes seen is a ptosis of the upper eyelid, which is a lowered position of the eyelid margin when the eye is in the primary position. The two surgical procedures used to correct ptosis are external levator aponeurosis resection, and internal Müller muscle–conjunctival resection. The internal approach has started to become more popular as it is a faster surgery, with more predictable results and less healing time for the patient. It is also easily combined with a blepharoplasty in patients with dermatochalasis.

One of the most common ageing changes seen is a drooping or ptosis of the upper eyelid. Ptosis is defined as a lowered position of the eyelid margin when the eye is in its primary position. In a normal eyelid at rest, the eyelid margin is approximately 3.5 mm to 4.5 mm above the central pupil. When the upper lid margin rests 2.5 mm or less from the centre of the pupil, this is considered a functional ptosis1.

There are two muscles responsible for elevating the upper lid: the levator palpebrae superioris and the Müller muscle. The levator palpebrae superioris is a striated muscle which provides the majority of muscle elevation of the upper eyelid. The levator transitions from muscle to aponeurosis tendon between 15 mm and 17 mm above the superior tarsal border. The aponeurosis inserts into the superior and anterior aspects of the tarsal plate2–5. The Müller muscle is a smooth, autonomically innervated muscle that originates from the levator muscle approximately 15 mm above the superior tarsal border. It is located just posterior to the levator aponeurosis, and anterior to the conjunctiva.

The most common form of ptosis is aponeurotic or involutional, in which an attenuated aponeurosis results in a drooping of the upper lid6. This is most often seen as an age-related process, but can also be seen after surgery or trauma, with long-term contact lens use, chronic allergic eyelid disease, and in floppy eyelid syndrome. Involutional ptosis is characterised by good levator function (at least 12 mm), and a high lid crease (greater than 10 mm). At times there is also a thinning of the eyelid tissue so that the iris colour may be seen through the eyelid7,8. 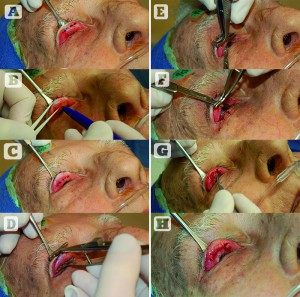 Figure 1 The Müller muscle–conjunctival resection. (A) The superior border of the tarsus is outlined with a marking pen, (B) calipers are used to measure the amount of tissue excision desired above the superior tarsus, (C) this is marked on the conjunctiva, (D) a mullerectomy clamp is then placed to encompass the demarcated tissue consisting of Müller muscle and conjunctiva, (E) a size 6-0 double armed plain suture is then run along the underside of the clamp starting at the temporal edge, (F) when the medial edge has been reached, a number 15 blade is used to make an incision along the underside of the clamp, (G) the suture is then run from the medial to temporal, hooking the conjunctiva and Müller muscle to the superior edge of the tarsus, (H) the two ends of the suture at the temporal edge are passed through the wound so that the knot will be buried when the suture is tied

There are two standard options for correcting involutional ptosis. The most common technique is through an external approach with resection and advancement of the levator aponeurosis9. This approach was developed in 1975 by Lester Jones, and oculoplastic surgeons, already comfortable with surgical blepharoplasty, found it an easy transition to use the external approach to correct the ptosis. It can also be corrected with an internal approach, using a Müller muscle–conjunctival resection.

The internal approach is a faster technique for ptosis repair, and is preferred by many patients and surgeons since there is no external scar. A neosynephrine test will help determine whether the patient is a good candidate for this surgery. The Müller muscle–conjunctival resection can be done alone, or combined with an upper eyelid blepharoplasty for patients who also have dermatochalasis. This surgery can be performed with local or local-sedation anaesthesia.

The marginal reflex distance 1 (MRD1) should be determined for both eyes. With the patient in primary gaze, a light is shone on the eyes and a corneal light reflex is seen in the pupil. The distance from the light reflex to the upper eyelid margin is the MRD1. A normal MRD1 is between 3 mm and 4.5 mm. An MRD1 less than 2.5 mm should be considered as clinically significant ptosis.

Once it has been determined that the patient has ptosis, a phenylephrine test should be performed to identify whether an internal approach can be used. Phenylephrine 2.5% drops are instilled into the ptotic eye or eyes, and it can be repeated after about 5 minutes. The phenylephrine will stimulate the Müller muscle, and should result in between 2 mm and 3 mm of lid elevation. If this occurs, the posterior approach can be used.