Combining therapies for the ageing face: The DUBLiN Lift

The DUBLiN Lift: To establish the clinical effectiveness of combining five treatments in the rejuvenation of the ageing face in an effort to increase aesthetic effect, patient safety, and reduce laser downtime.

The face is the area for which the majority of patients seek cosmetic rejuvenation as the convex lines of a youthful appearance tend to flatten and droop as one grows older. The younger face is characterised by a balance captured in the classic shape of the inverted triangle. The reversal of this ‘triangle of beauty’ as ageing proceeds is considered generally less aesthetically appealing1. At present, a variety of different dermatologic and volumising treatments are available for facial rejuvenation. These include chemical peels, dermal fillers, intense pulsed light and radiofrequency lasers, platelet-rich plasmas (PRP) microneedling, microdermabrasion, botulinum toxin injections, and laser resurfacing. Each treatment has its own relative beneﬁt, as well as risks2, 3.

In recent years, facial rejuvenation has been revolutionised with the development of CO2 fractional laser skin resurfacing. This procedure benefits from faster recovery time, more precise control of ablation depth, and reduced risk of post-procedural problems. However, there have been cases of hypopigmentation, hypertrophic scars and skin mottling, most often seen on the face, neck and chest when the laser parameters are used more aggressively4. Furthermore, the technique does not attend to chronological ageing problems such as volume deficits resulting from the loss and repositioning of facial fat.

This article examines the possibility of combining five established therapies in an attempt to address these deficits. The facial rejuvenating therapies include microneedling, low-dose UltraPulse laser, PRP growth factors, Omnilux 633 nm light, and neurotoxins. The technique is called the DUBLiN facelift as an acronym of the procedures involved: Dermaroller, UltraPulse laser, Blood growth factors, Light (near-red 633 nm), and Neurotoxin.

The author compared this method to fractional laser skin resurfacing with regard to the reduction of photoageing and overall aesthetic effect. Neurotoxin was used in both arms of the study.

The face, and particularly the eyes, is very important for contact between humans, as this area provides a window to the rest of society with regard to a patient’s level of health, tiredness and emotional status, as well as interest in others4. Many health professionals consider the periorbital area of the face as the most important area of rejuvenation as eye-to-eye communication occurs in approximately 80% of all human interactions6. Both areas present a barometer of a patient’s chronological and environmental age, and mastering the proper evaluation and execution of their aesthetic rejuvenation is paramount for all cosmetic doctors.

More recently, patients are seeking effective facial rejuvenation procedures with less downtime and low risks7. This change in attitude has been prompted by a realisation of both doctors and patients that the much hyped non-ablative methods were often subject to extravagant claims in terms of efficacy2–4. For many years, CO2 laser resurfacing was considered the ‘gold standard’ in treating photodamaged facial skin6–11. Cutaneous laser resurfacing with a fractional (CO2) laser involves the vapourisation of the entire epidermis, as well as a variable thickness of the dermis. Many physicians stated that the ultrapulsed CO2 laser was the most effective method of laser resurfacing12–13. Photodamaged skin is the result of years of exposure to harmful ultraviolet light and is clinically demonstrated as a gradual deterioration of cutaneous structure and function. This results in the epidermis and upper papillary dermis having a roughened surface texture, as well as laxity, telangiectasias, wrinkles and variable degrees of skin pigmentation14–15. 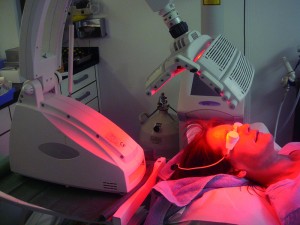 Although ultrapulsed CO2 resurfacing lasers were considered the best treatment option, they had many post-procedural problems16, 17, including prolonged post-operative recovery, pigmentary changes, and a high incidence of acne flares and herpes simplex virus (HSV) infection18, 19. Many patients complained of oedema, burning, and erythema that sometimes lasted for many months20, 21. The implied risks and long downtime made many patients reluctant to accept this method of treatment22, 23. More recently, fractional resurfacing lasers have addressed many of these earlier problems with benefits of faster recovery time, more precise control of ablation depth, and reduced risk of post procedural problems8. These lasers are extremely versatile, in that they can be used for the treatment of facial rhytides, acne scars, surgical scars, melasma and photodamaged skin, and many have entered the market at the same time24.