Let us distinguish the three parts of the eyebrow anatomically: the medial head, the central corpus, and the lateral extremity. The shape of the eyebrow in a young Caucasian individual is almost horizontal at the head and corpus, with an elevation of the extremity which almost corresponds to the orbital margin in men. In women, the present tendency considers the elevation of the tip, which is 2–8 mm above the orbital margin, as ideal.

Over the years, the force of gravity and, above all, the action of the orbital muscle, causes a fall of the lateral portion of the eyebrow. As a result, the face takes on a sadder expression and a lateral excess of skin, which is often marked, becomes evident. Women almost always correct this drop of the eyebrow by plucking the lower lateral part, to obtain an apparent raising of the tip. Often, older women depilate the eyebrow completely, redrawing it in a higher position by tattooing.

Upper blepharoplasty carried out with Rees’s traditional drawing1 (Figure 1) allows removal of the cutaneous overabundance, but does not correct the lateral hooding. Therefore, when programming an operation of upper blepharoplasty with this type of incision, it is advisable to evaluate the appropriateness of a browpexy operation. Browpexy may be carried out through a palpebral incision, to obtain the stabilisation or new rise of the lateral portion of the eyebrow, through anchorage to the orbital margin. 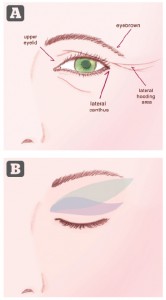 Figure 1 (A) anatomical features around the eye and (B) illustration of different types of skin excision. The Rees classical drawing is in green, and the authors’ technique is in blue

For some years the authors have carried out upper blepharoplasty with a type of drawing (Figure 2) which enlarges the cutaneous removal higher and further laterally, and limits the necessity of the additional operation of browpexy3 (Figures 2–5).

Examining the sagging of the lateral soft tissues linked to ageing, one observes that areas of skin with very different characteristics are involved: the lower margin of the eyebrow marks the transition between the palpebral skin, thin, flexible and lacking subcutis, and the frontal skin, much thicker and not very flexible.

Rees’s classical drawing, like his range of variations2, recommends the removal of palpebral skin exclusively. In this way, the scar corresponds to the palpebral furrow, with limited visibility, and the thin, flexible palpebral skin, which accumulates above the external canthus, is removed.

The excess thin and flexible palpebral skin above the lateral canthus is no longer removed, but is lifted and redistributed upwards and externally. The suture no longer runs along the palpebral furrow, but from here it rises in a uniform curve upwards and externally. The aesthetic unity of the eyelid–eyebrow–brow is reconstituted in an optimal manner. 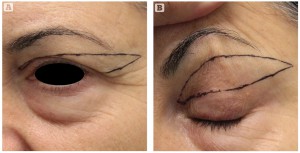 Figure 3 (A) This 43-year-old woman presented for rejuvenation of the eyelid area and correction of lateral hooding. (B) The patient’s preoperative markings,
and (C) 6 months after upper blepharoplasty using the authors’ technique 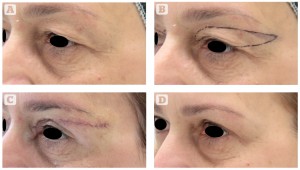 Figure 4 (A) This 50-year-old woman presented for rejuvenation of the eyelid area and correction of lateral hooding. (B) The patient’s preoperative markings. (C) Shortly after the operation (10 minutes). (D) 6 months after upper blepharoplasty using the authors’ technique

The scar, even though in a more visible area, becomes insignificant in a short time, because the flexibility and abundance of the saved palpebral skin prevents any tension on the cutaneous margins, which are brought together with an accurate intradermal suture. 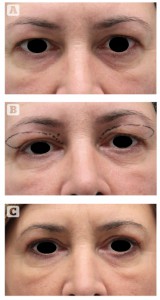 Figure 5 (A)This 48-year-old woman presented for rejuvenation of the eyelid area and correction of lateral hooding. (B) The patient’s preoperative markings. (C) 6 months after upper blepharoplasty using the authors’ technique

The amputation of the lateral lowered portion of the eyebrow modifies the shape of the eyebrow itself, with a result equivalent to that given by a real elevation. It therefore becomes pointless in most cases to seek a browpexy. Figures 2–5 clarify the simplicity and efficacy of this type of correction.

The authors have now been carrying out this type of blepharoplasty for a number of years. In the beginning there were reservations over the location of the scar being in a more visible area and on thicker skin; in time the authors realised that in a period varying from 5–6 months, the scar becomes insignificant. For as long as it is visible, it is possible to cover it with make-up.

In recent years, the authors have frequently performed this operation — always in an outpatient clinic and under local anaesthesia. The operation takes 30 minutes to perform, and the intradermal suture is removed after 5–6 days, with fast recovery and natural results.

The satisfaction on the part of the patients convinces  the authors that this type of approach towards upper blepharoplasty, with the correction of lateral hooding, may be used more often in the future.