Bridging the Gap Between Filler and Fat 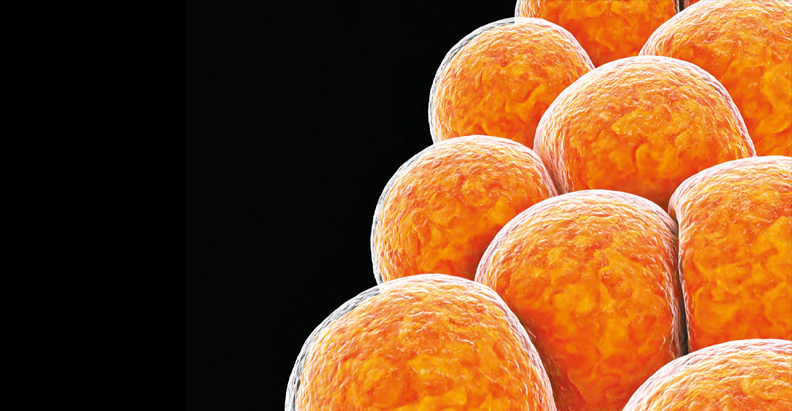 HUMAN-DERIVED ADIPOSE MATRIX (hDAM) is a relatively recent introduction into the field of alternative filler injectables. Offered by several different tissue processing companies, the product was initially intended to be a standalone filler. The method of processing the material is as follows: donor tissue is harvested, and after extraction of the adipocytes, the remaining stromal vascular fraction is gamma irradiated. It is lyophilized and later reconstituted using sterile injectable saline prior to use. The initial supposition that injection of this product causes clinically significant induction of adipocyte proliferation has not been validated with long-term volumetric studies.

The author’s experience with use over more than two years has been that the injected volume of tissue matrix does not provide enough prolonged volume retention to translate into long-term patient satisfaction. While the filler manufacturers have excelled in creating a variety of product viscosities, autologous alternatives are not so sophisticated. By its nature, human fat is compressible. However, the combination of autologous nanofat plus hDAM seems to generate both long-term volume retention and a bit more of a defined shape that can be lacking with traditional fat grafting. The combination of a mechanical scaffold that holds adipocytes in place, plus several angiogenic growth factors released by the matrix, offers better ‘take’ of the grafted fat than might been seen with traditional techniques. 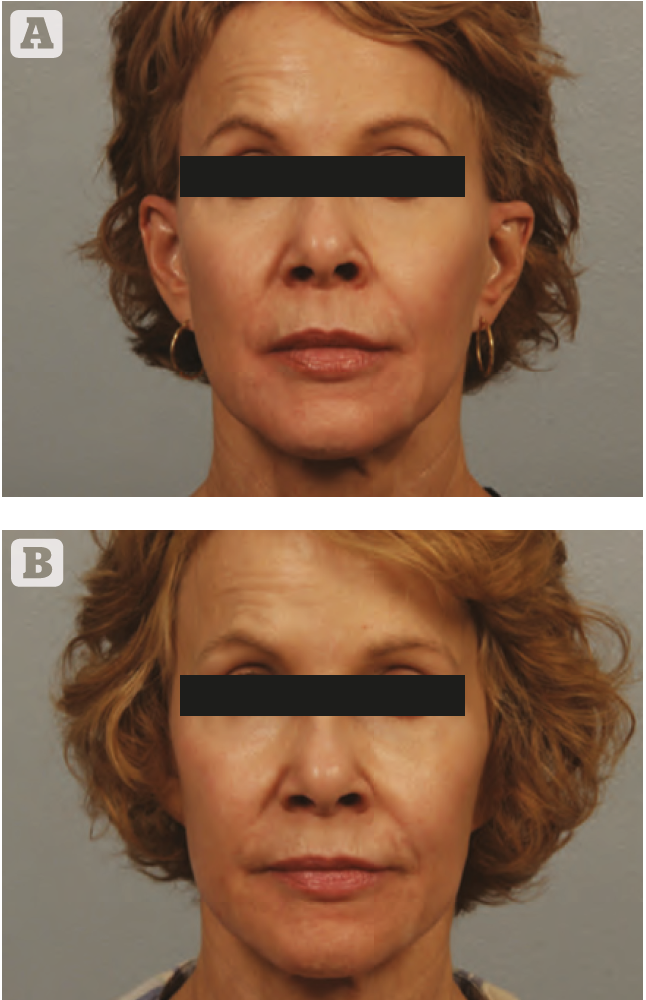 A pilot series of ten patients were treated and followed over a period of one year. Donor fat was harvested using the Mendieta method. A combination of 15 cc of processed autologous fat was combined with 3 cc of an autologous human-derived adipose matrix (Allofill, Biologica Inc). An average of 18 cc of substance was injected into each patient. The mixture was processed using a filtered Luer lock system which micronized the fat and emulsified the solution (Tulip) at the same time. The injectable solution then resembled a smooth, thin paste. Intradermal as well as subcutaneous injection was possible with this formulation. Full face injections were performed in areas of volumetric deficiency including brows, supraorbital and infraorbital regions, malar bags, malar eminence, midface, nasolabial folds, lips, marionette lines, and jawline. Postoperatively, patients experienced 3–4 day’s worth of temporary bruising and swelling. Patients were followed at 1 week, 6 weeks, 3 months, and 1 year.

Allofill+ (Biologica) is produced from allograft soft tissues comprising approximately 80% excised adipose tissue and 20% dermal tissue. Tissue utilized for production is procured from organ donors within hours of death and sent to the tissue bank on ice. The tissue bank medical director reviews serologies and donor history to determine donor eligibility. The medical director must clear the donor prior to processing at the tissue bank. Tissue procurement and processing complies with the FDA’s Good Tissue Practices (GTP)1 and follows standards issued by the American Association of Tissue Banks (AATB)2. 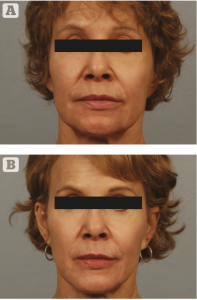 Once cleared, a donor’s tissue is thawed and sectioned in the tissue bank’s cleanroom. The donor tissue is fragmented into smaller particles and intracellular proteins are harvested along with the extracellular matrix. The intracellular proteins are then charged to drive the binding of growth factors to the extracellular matrix. This step of binding the intracellular growth factors renders the extracellular matrix with a high content of angiogenic, mitogenic, and adipogenic proteins. A few examples of the growth factors that are elevated using the AMP process are acidic fibroblast growth factor (aFGF), basic fibroblast growth factor (bFGF), and vascular endothelial growth factor (VEGF). aFGF has been shown to be a robust angiogenic agent3 and aids in fibroblast and keratinocyte proliferation4. bFGF has been shown to aid in angiogenesis5 as well as adipogenic differentiation6. VEGF is well characterized as a powerful angiogenic agent7. After the binding process, the donor tissue is cleaned thoroughly with combinations of detergents, antiseptics, and antibiotics and is irradiated. After the cleaning process is complete, the particulated donor tissue is dispensed into syringes. The syringes are then pouched and labeled, including allograft serial numbers unique to each syringe. These allograft ID numbers allow for each syringe to be tracked back to the donor. 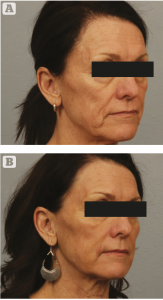 Figure 3 (A) 52 year old prior to any cosmetic treatment. (B) 3 months following injection 18 cc allograft matrix plus nanofat. Note infraorbital and perioral improvement

The product may be injected to supplement soft tissue defects and volume loss. The syringe contents are cycled between the two syringes included to prepare the tissue for injection through a needle or cannula. At this time any additives such as nanofat or microfat can be driven into the scaffold under pressure using a two syringe system with a Tulip filter. Remodeling occurs after the particulated tissue is injected into the desired site in the recipient. The particles start to self-assemble into a three-dimensional lattice that encourages cellular ingrowth. As the host’s enzymes digest the implant, growth factors bound to the extracellular matrix are released. In theory, these growth factors influence the host’s adipose-derived stem cells (pericytes) to differentiate into vascular endothelial cells and pre-adipocytes. After 3–6 months, the implant is fully remodeled into living host tissue and can improve the soft tissue defect.

Patients noted volumetric improvement that persisted at the 1 year mark, though some erosion of the initial effect was seen. A full volumetric correction was not achieved with only 18 cc of injectable substance. Areas of noted volumetric deficiency were well improved, and in all patients, a perceived long-term value was noted over temporary injectables as seen using the Likert scale. Areas needing volume plus a defined shape, such as the malar eminence, prejowl depression, and infraorbital hollows were noted to be top targets.

Figure 1 shows a patient with ‘filler failure.’ She noted that 6 months after her last injection with two syringes of HA, all effect seemed to be gone. Figure 2 shows the same patient before (left) and 6 months after bilateral injection of 18 cc nanofat plus human-derived adipose matrix.

Figure 3 demonstrates a 52-year-old ‘virgin’ patient with no previous treatment. Her results before and after injection with 18 cc nanofat plus hDAM are less noticeable than in Figure 1 due to the profound pre-existing volume deficit.

Figure 4 shows a 65-year-old gentleman before treatment (left). The central image shows the modest improvement achieved with 2 cc of HA filler. The image on the far right shows facial appearance 1 year following light erbium laser resurfacing and injection of Allofill plus nanofat in the bilateral malar and periorbital region. The subject had hemifacial atrophy on his left side. Two-thirds of the 18 cc volume was injected on the left side to address the atrophy. The correction of malar shape is well retained.

Figure 5a shows scanning electron micrographs of an area with no adipocytes injected with hDAM alone. No de novo generation of adipocytes is present at 3 months. Figure 5b shows an SEM biopsy taken at 3 months from the prejowl region in the same patient. A combination of nanofat plus hDAM was injected into this area.

The use of biologicals in aesthetic medicine is rapidly expanding. Keller noted that biologicals may replace many devices in the aesthetic medicine field8. ‘Biologicals’, in the cosmetic medicine field, are defined as: ‘a diverse category of products and are generally large, complex molecules. These products may be produced through biotechnology in a living system, such as a microorganism, plant cell, or animal cell, and are often more difficult to characterize than small molecule drugs.’9 While many of these solutions are applied topically following either ‘cold’ or thermal microneedling, injectable options are also present10. 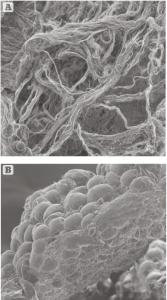 The concept of using biological substances as aesthetic enhancers is not new. In ancient times, honey was used as a topical humectant and wound dressing11. In the 1950s, Pistor developed a method of needling (mesotherapy) to introduce a variety of these substances into the dermis and hypodermis, for purposes ranging from treating sports injuries to hypertension, hair loss restoration, and subcutaneous fat reduction12. While plant-based stem cells remain popular in Europe, there is little scientific evidence of a lasting human benefit13. The FDA has severely curtailed the use of human-derived adipose cells for the treatment of various conditions14. Cultured growth factors derived from bone marrow are available as an off-the-shelf alternative to PRP15. A new introduction includes a targeted peptide that stimulates a patient’s own quiescent wound repair stem cells, located at the base of the isthmus of the hair follicle16. Once stimulated, LGR6+ receptors send a message to the basal cells to produce new epidermal cells, as if an injury had occurred. Both hDAM and an acquired (not cultured) collection of cytokines and growth factors are new in the field17,18. Porous microgels have been used to ‘ferry’ HADSCs to their proper destination19. The latest addition to the engineered biological field is the introduction of hydrogels with a programmed protein sequence, which self-assemble when applied to a biological surface20. The choice of peptides placed in the proper sequence can program a certain response. Currently, one such product is commercially available in Europe and as a topical hemostatic agent.

Over a patient’s lifetime, an average of 230 cc of volumetric loss occurs in the bony mass of the skull alone21. When added to muscle atrophy and subcutaneous fat loss, the overlying skin becomes lax and the face appears sunken. In the early 1990s, face lifting with skin excision was the initial approach to the aging face. Current treatment options have pushed the surgical approach into the category of an adjunct procedure, since no volume correction, improvement of skin quality, or restoration of a truly youthful appearance can be achieved with skin excision alone. Most aesthetic practitioners now focus on volume restoration rather than creating a tighter face. While the ideal filler is not yet available, an alternative that lasts longer than hyaluronic acid fillers and has more predictable retention than grafted fat would be a welcome one.

The addition of human-derived adipose matrix to autologous fat for volume restoration offers graft stability by providing a scaffold within which the small aliquots of fat reside. Since motion at the graft site reduces fat ‘take’, the reduction of mechanical shearing forces can help improve graft retention. A second advantage of using hDAM in combination with fat transfer is the readily available group of growth factors that stimulate angiogenesis.

The third reason to consider mixing the matrix with autologous fat is the shape retention capability. As the science of self-assembling matrices improves, the possibility of an injectable shaping substance, similar to a facial implant, may add to the range of treatments options for facial volumetric loss due to ageing.

Microneedling in the medical and cosmetic field

Treating hyperpigmentation using a combination of hyaluronic and succinic acids 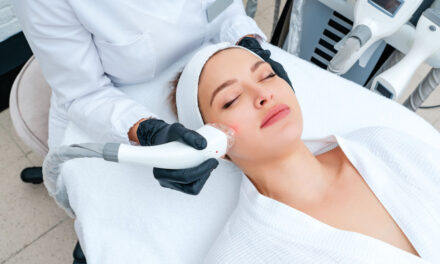 The Uses of Long-Pulsed Nd:YAG Laser in Dermatology