Biology, fundamentals and safety of lipofilling: current standings of ‘the liquid gold’

ABSTRACT
Lipofilling may well be the future of plastic surgery and form the foundation of regenerative medicine. Despised by many in the earlier years, technical improvements and the discovery of the adipose derived stem cell (ADSC) in the lipograft led to renewed interest and resulted in new applications. Although the future of lipofilling looks promising, there are many (fundamental) questions about the effect of different methods of fat harvesting, processing, injection and the role of additives like platelet-rich plasma (PRP) that still need to be answered. Also the oncological safety of lipofilling, especially in the breast, is still subject for debate. In this review, the authors provide an update of the current standings, along with practical tips of the use of what we call ‘liquid’ or ‘living gold’.

Lipofilling is the removal of fat by liposuction, which is then injected into the desired region of the body for volume enhancement. However, the technique is not new and more than 125 years ago the alleged potential of living fat cells as fillers was explored1. Lipofilling has regained popularity in recent decades. Prior to 1966 there was criticism of the scientific knowledge and personal experience of clinicians advocating lipofilling. An expanding knowledge of adipocyte survival and standardisation of the lipofilling method contributed to the predictability of fat graft take and has expanded its applications. Despite these developments, lipofilling is still labelled as ‘experimental’, including by the senior authors’ own national board (De Nederlandse Vereniging voor Plastische Chirurgie, NVPC). The use of living fat cells as a graft is therefore labelled as a ‘special medical treatment’ and is not recognised as a valid treatment option. The American Society of Plastic Surgeons (ASPS) fat graft task force2 agrees that lipofilling for aesthetic breast augmentation is not recommended for reconstruction, but is very promising and clinically relevant. More level one and two evidence-based research is required.

The scientific interest in lipofilling received a great boost from the discovery of the pre-adipocyte stem cell in lipoaspirate3. This resulted in an exponential increase in the number of mesh heading-related publications scored on PubMed.

In this article, the authors discuss the latest innovations in lipofilling regarding graft survival, safety, and regenerative potentials, along with some practical tips.

Since the beginning of ‘modern’ plastic, reconstructive, and aesthetic surgery, the potential use of adipose tissue in lipofilling has been examined. Gustav Neuber4, just having completed the construction of the world’s first sterile operating theatre in Germany in 1893, was the first to use fat in correcting a scar after osteomyelitis of the orbital rim. In 1895 Vincenz Czerny used a lipoma for breast reconstruction after mastectomy5. Eugene Hollander in the Handbuch der Kosmetik, showed the first pictures after lipotransfer for lipoatrophy of the face and a retracted defect of the chest1. Results at that time were dismissed as ‘moderate’ and ‘highly variable in nature’. Charles Miller, a controversial doctor from Chicago, published in 1907 ‘Cosmetic Surgery: The correction of featural imperfections’6, in which he was the first to describe the use of a cannula to inject living fat cells. A newspaper interview from that time (1908) shows how the established order ridiculed him and expressed hostilities to his interest in elective surgery and the use of fat. This led to rejected manuscripts and many years of scepticism because of non-reproducible results. Only in the second half of the 20th century has lipofilling come back into the spotlight. Yves-Gerard Illouz7 introduced liposuction, but also the reuse of lipoaspirate for lipofilling of the breast. Additionally, Pierre Fournier8 propagated harvesting by suction with a sharp syringe. In 2009 they presented together their 25 years of experience with lipofilling at EMAA in Paris (now AMEC). The technique became more popular after Sidney Coleman, Plastic Surgeon, New York, improved the reproducibility by centrifuging the lipoaspirate prior to injection9. Until then, ‘decantation’ was preferred (the water fraction from the lipoaspirate separates from the fat cell-containing fraction used for injection). The quantity of living fat cells retrieved by this technique was unpredictable, varying from 20–50%; separation by centrifugation improved this quantity to 85–90%10,11. 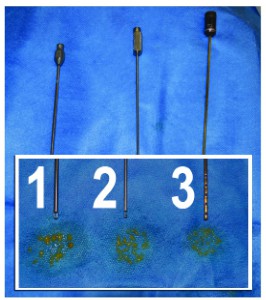 Coleman also introduced the word ‘lipostructure’ in 2006, and injected with blunt cannulae12. Recently, micro-fat grafting (fat particle diameter <1 mm) was introduced in combination with less traumatic methods of lipofilling. These innovations undoubtedly improved predictability and enhanced results.
Research indicates three steps should be taken for an optimal result from lipofilling:

Since the introduction of lipofilling and especially in the last decade, controversy about the ‘survival’ of transplanted fat has existed. Different methods of fat harvesting, processing, and injection as well as the differences between the host and donor sites have contributed to this13.

It is commonly accepted that the vascular ingrowth starts from day 7 after transplantation14. Fat necrosis is expected to peak at day 30. Biopsies from lipografts taken in a number of animal studies 2 months after lipofilling show a well vascularised sample of tissue with living functional cells14,15. The number of human studies that monitor long-term fat graft volume is limited. Swanson et al16 explored the survival of fat grafts in the face by analysing lipograft volume through multiple magnetic resonance imaging (MRI) scans. Although limited by a small number of patients, the study shows a stable lipograft volume after 6 months, with a similar density on the MRI as ‘normal’ fat tissue. The authors also noted that there was no significant difference in graft volume between 1 and 6 months after lipofilling, suggesting adequate vascularisation of the remaining cells in the lipograft. Additional evidence for fat graft survival is found in the studies by Herold et al17 and Khouri et al18. Both studies measure breast volume after lipofilling using MRI imaging. The study of Herold et al shows 70% lipograft retention (n = 10) 6 months postoperatively. Khouri et al reported even higher percentages: 80% (+/- 18%) after 6 months, with volumes up to 277 cc per side. It has to be noted that the BRAVA pre-expansion system (Brava, LLC, Miami, FL, US) was used in the study of Khouri et al. The recently published study of Choi et al19, shows an average volume retention of 52% after 140 days at volumes of 111 cc up to 216 cc per breast (n = 20). Volume was measured with a 3D photograph system instead of more traditional CT and/or MRI measurements. The study by Choi et al shows relatively low volume retention of only 29% with small volume lipofilling. In a retrospective study by our team using photographic analysis, significantly better long‑term aesthetic outcomes were measured with MACS-lift and lipofilling (n = 42) compared with MACS-lift alone (n = 50)20. These first findings played a key role in the senior author’s development of the one-two-three dimensional face ageing concept. 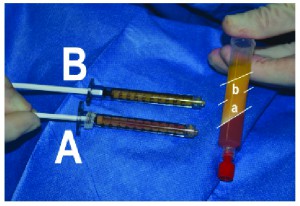 Figure 2 Centrifuging lipoaspirate results in three fractions, clearly visible in a 10 cc syringe. From bottom to top: liquid waste (water and blood), (A) hyperdense fat, (B) hypodense fat, and oil from ruptured fat cells. The hyperdens fat (the 1 cc syringe marked A) is used for superficial lipofilling since it is rich in adipose-derived stem cells. Hypodens fat (the 1 cc syringe marked B) is used for volumetric deep lipofilling

The diameter of the lipofilling cannula has drastically decreased over the last couple of years. The standard Coleman cannula had 2.88 mm suction holes, the refined cannulae used by the senior author since 2002 have a diameter of only 1.8 mm. From 2010 onward, the diameter decreased even further to 1 mm (Figure 1). If you look at the fat graft (or a fat particle) in abstract fashion and considered it as a sphere, the diffusion area would correlate with the radius to the third power. Further downsizing the harvesting cannula diameter could, at least in theory, increase the diffusion area by 80–95% (Table 1)20. It is nowadays commonly accepted that graft survival in the first days depends on diffusion and imbibition14.